The title sounds a bit cliché, but I could not resist choosing it because the Boulder 812 HeadAmp/DAC/Streamer is a true Boulder 866 amplifier miniature at a full sized price: €10 900.

It has the same sloping front panel and what appears to be randomly mounted heatsinks on the side panels, giving it an Accordion appearance. Or, in this case, more like the smaller Concertina.

The heat sinks are true works of modern art. Well, art has its price, and so does the quality of construction. The excellent sound is only a consequence of the whole care put into the production process. 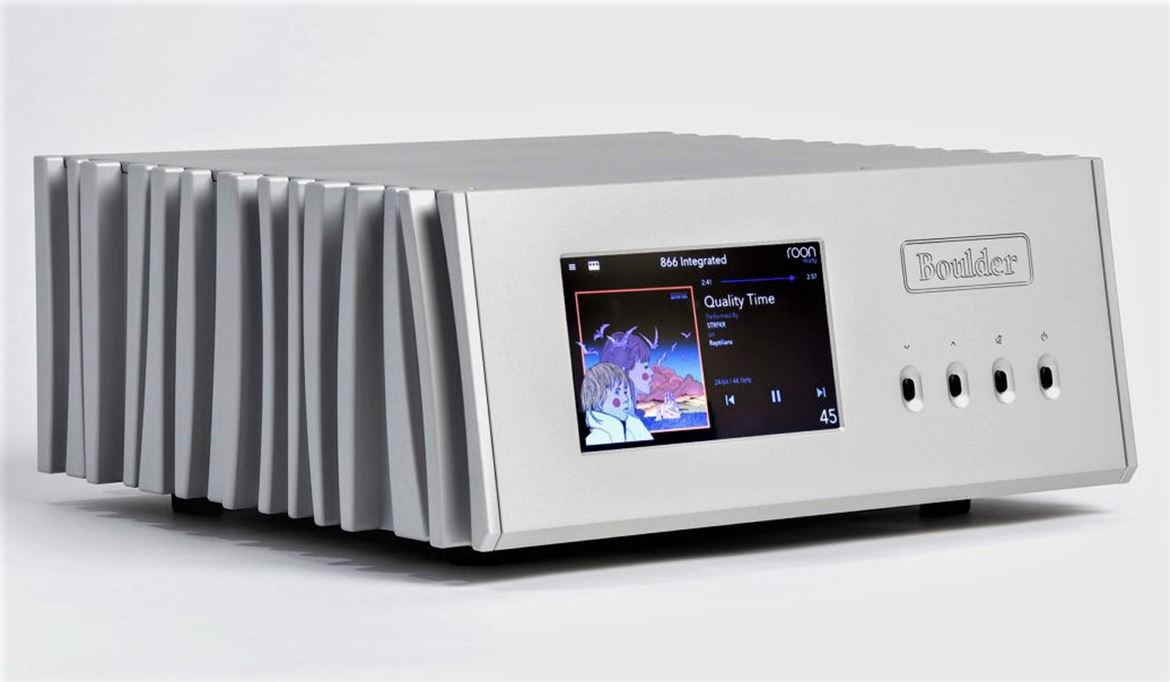 Note: Put the flap back in place when the headphones are not plugged in to prevent dust from accumulating on the connectors.

The 812 has flywheel-type volume control and no remote. Or rather, it is optional. Boulder says it is a discrete volume control system that does not use potentiometers or resistors. It must be DSP controlled. And I guess that’s why DSD must also be converted to PCM352.8kHz. 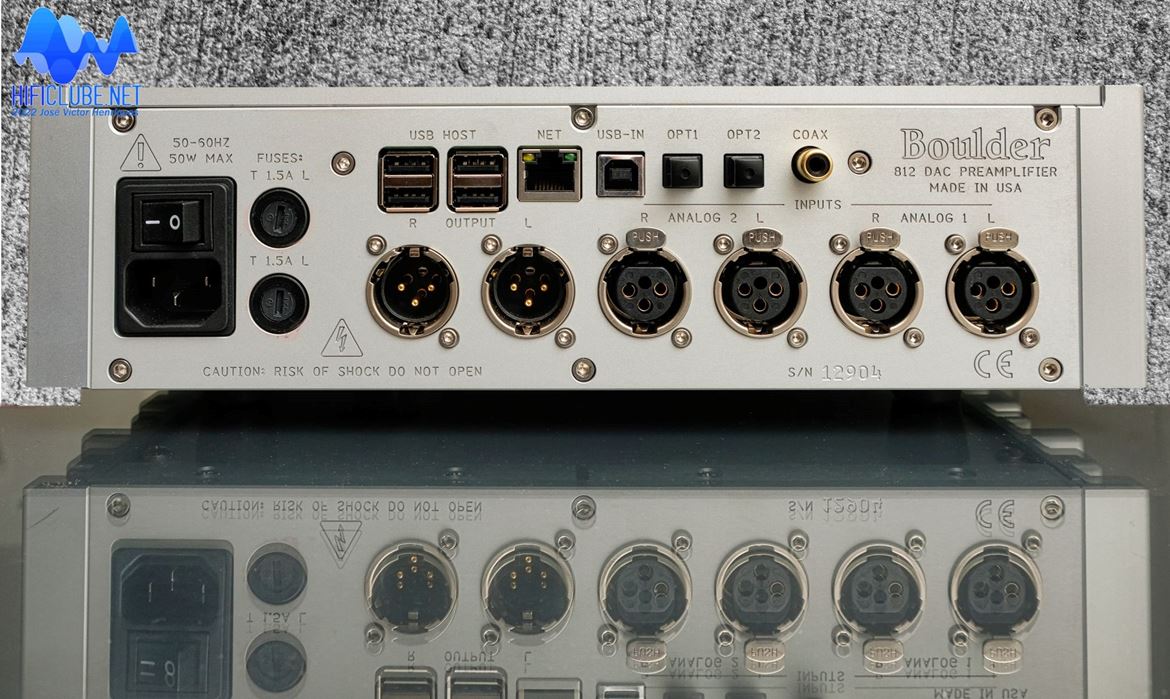 The 866 is a 200W integrated amplifier while the 812 is a preamplifier with analogue inputs and outputs (XLR only) that can be configured for fixed output; a DAC with digital inputs: optical, coaxial, USB A/B (you can play files from NAS or USB drives); it is also a streamer with an Ethernet input, and finally it is a dedicated headphone amplifier.

All functions can be used together or independently. For example, the preamp outputs (XLR) can drive an external amplifier or a pair of powered speakers with balanced inputs.

I was tempted to listen to the 812 after hearing the Boulder 3060 stereo amplifier sway on the Ultimate Audio floor with a pair of fabulous Rockport Lyra. Can the first-ever Boulder 812 HeadAmp/DAC/Streamer live up to the same expectations with headphones? Yes, it can! 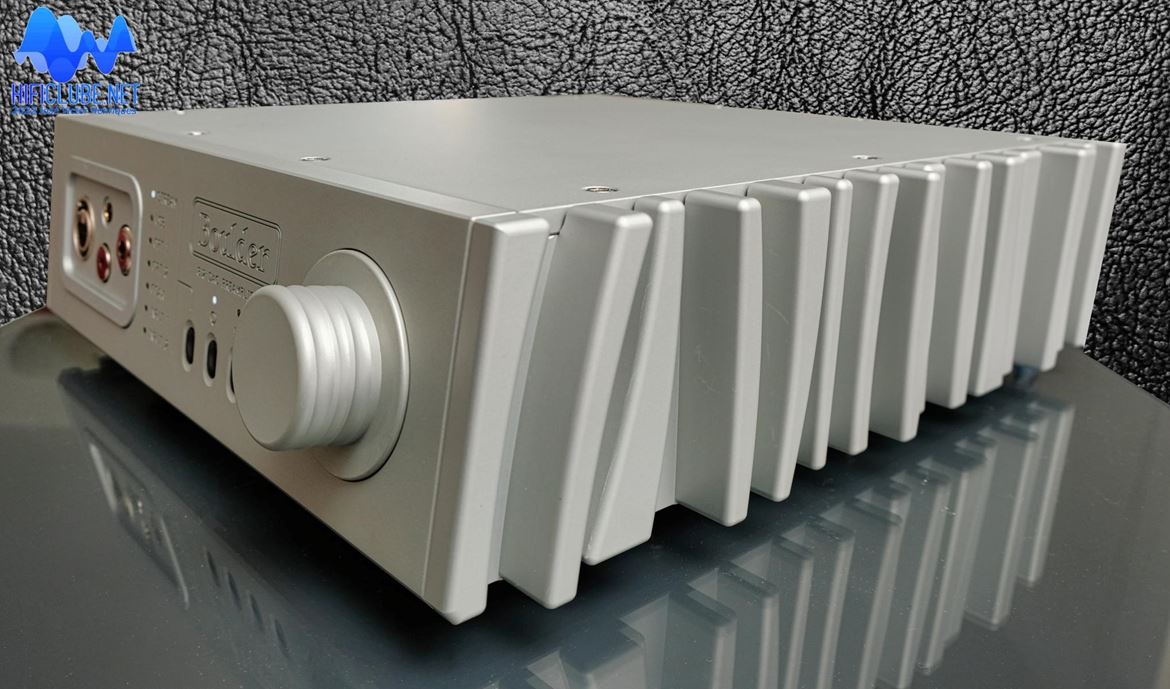 Boulder 812_ the heatsinks are a distinctive mark of Boulder amps.

According to Boulder, 200mW/8 ohms and 80mW/600 ohms are enough to drive all known headphones. In my experience, it’s not enough. However, the secret of the 812 is its ability to match the power to the impedance of any headphone automatically. As a result, I never felt a lack of power to drive even the most demanding headphones, particularly with High Gain mode engaged.

Note: Do not use High Gain with IEMs.

Boulder offers a controller app for Android and iOS. Unfortunately, I could not download the Android app for my Galaxy, so I downloaded the Boulder controller app for iOS and used an iPad. Setting up the 812 and the home network takes about ten minutes.

The Boulder app can only be used to select sources, set the initial and maximum volume (to protect your headphones - and ears!), and configure the DAC to a fixed output or for input trimming. You can and should also set the gain to "High" to make the planar magnetic headphones sing better.

Be careful with Theatre Mode/DAC Mode, as it bypasses the volume control. Use this mode only when the 812 is connected to a preamp or receiver with volume control.

A better control app would be welcome, especially since the 812 is also a streamer. That way, I did not have to connect it to a computer, as I could not make it work with the App alone (my bad, I am sure). However, in the manual, Boulder says it can: 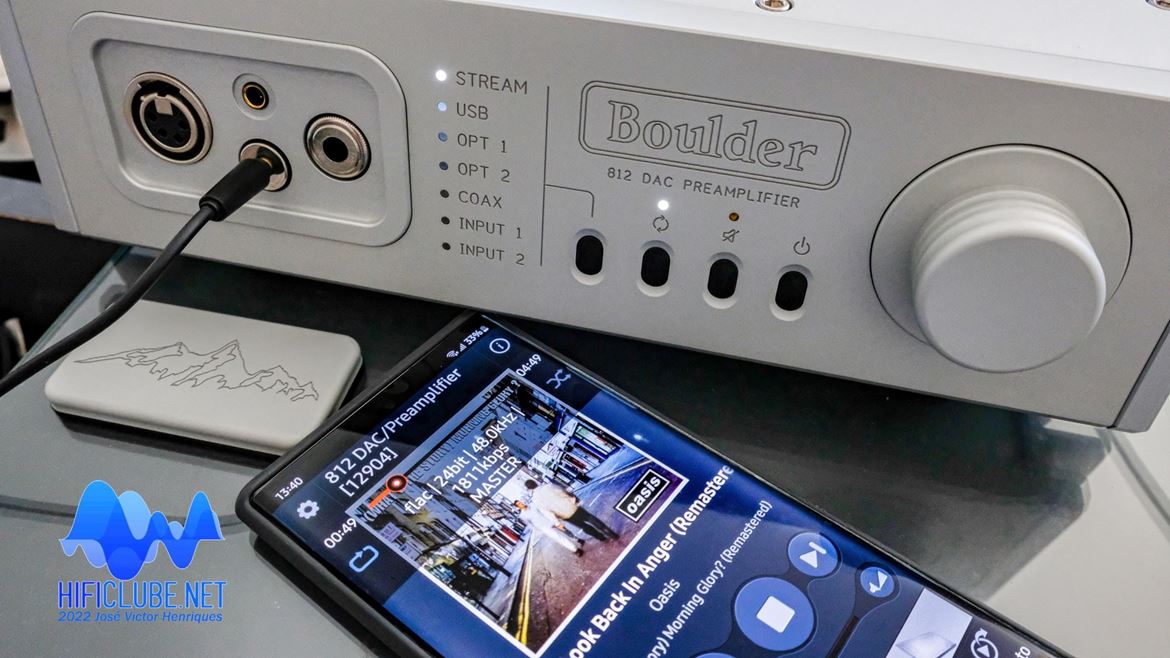 You can download other free and more user-friendly apps, such as mConnectLite, which allows you to quickly access Tidal and Qobuz without needing a computer

Fortunately, you can download other free and more user-friendly apps, such as mConnectLite, which allows you to quickly access Tidal and Qobuz without needing a computer (see photo).

My laptop is not a MAC, so it requires an Asio driver to use a media player like JRiver, which I could not get anywhere. I requested it, but I did not get it before the deadline.

However, with Wasapi, you can play back up to PCM192 and DSD128 (DoP) files on the JRiver with a UBS B connection. Go to Tools/Options/Audio Device and select 3-XMOS X1-L1. The same Driver can be used on Tidal via PC.

Note: By default, all PCM signals on the coaxial and USB inputs are upsampled to 192kHz.

Boulder 812/Roon _all PCM signals (including MQA) are converted to 352,8kHz by default.

The 812 reaches Nirvana with Roon, albeit only as an EndPoint. With Roon, the Boulder 812 plays PCM, DSD, DXD - and Tidal unfolded MQA.

Together, the Roon/812 team solves all mathematical equations by "upsampling" everything to 352.8kHz, or downsampling if the resolution is higher: e.g., 384kHz. (see photo above). 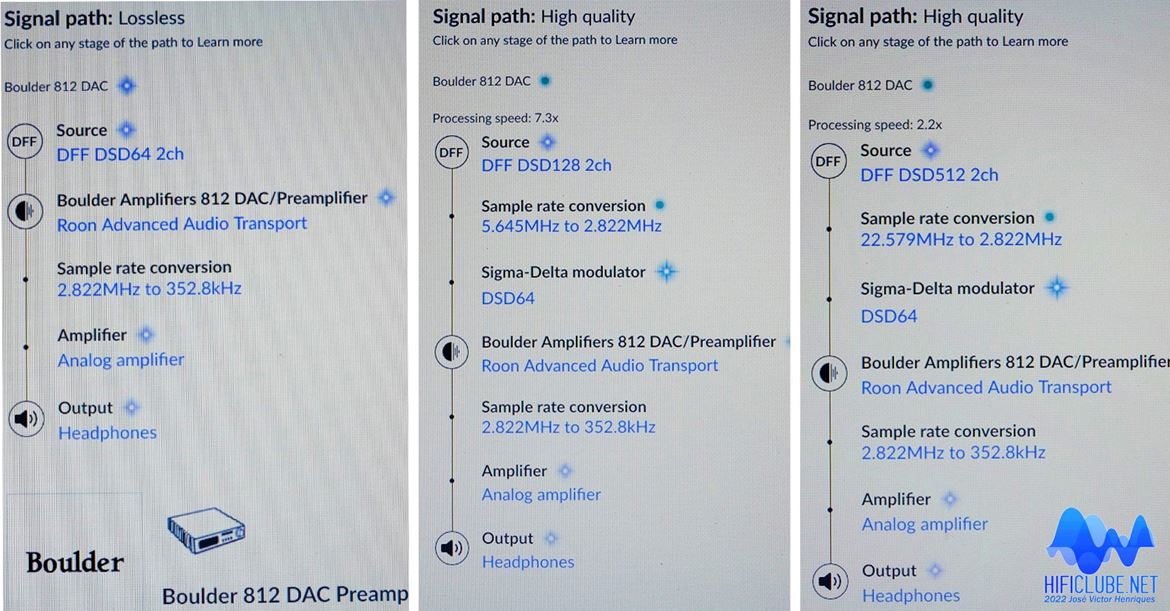 Boulder 812/Roon_ all DSD signals are converted to PCM352,8kHz by default.

Forget the math; listen to music.

As soon as you start listening to music, you forget all the mathematical complexity involved in bit conversion. The sound is excellent with all types of headphones: dynamic and magnetic. I used my Pryma, the Hifiman 1000 and a pair of new T+A Solitaire P SE and everything sounded great.

The sound is clean, informative, if not overly detailed, and dynamic, as if springing from the black silence of a warm and pure water fountain. The midrange has a rich harmonic texture and conveys a sense of intense, saturated colour, yet paradoxically it always sounds neutral, never over-processed.

Bass is dry, tight, solid, articulate, and well-defined in the best Boulder tradition

Bass is dry, tight, solid, articulate, and well-defined in the best Boulder tradition, albeit revealing the unique character of each headphone. The T+A Solitaire P SE are the ideal pair for the 812, as they have electrostatic accuracy despite being planar magnetic.

First, I had intended to review them together. Then I heard the 812 and decided to split the review, so I could keep listening to the 812 for a more extended period, despite having other DACs waiting for reviewing. It’s that good.

The four complementary JFET pairs used in the amplifier output stage sound reminiscent of tubes but without compromising overall resolution and transparency. No one would say that we are listening to digital sound through a solid-state device. 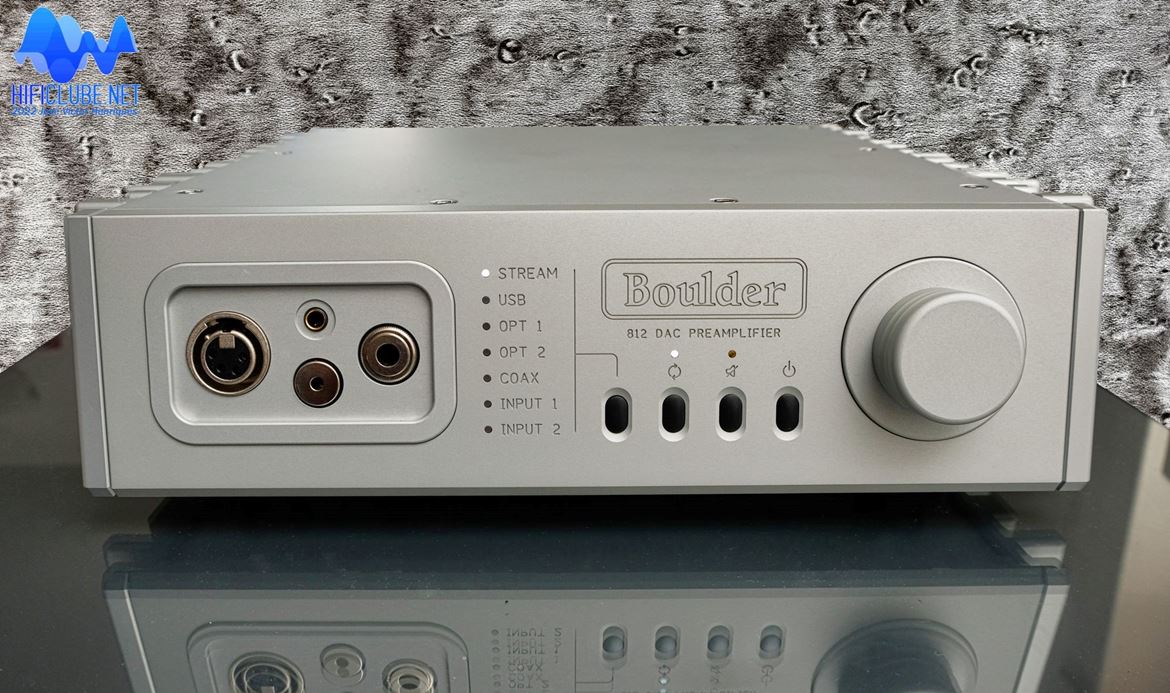 The Boulder 812 might not be the most ergonomic of HeadAmp/DAC/Streamers. However, the design is so original that it leaves no one indifferent, and the sound quality is disarmingly natural - you feel like listening to it non-stop. Unfortunately, the price is also disarmingly high: 10 900 euros!

Visit Ultimate Audio and listen to it at your own risk. The temptation to buy it is overwhelming, despite the high price. You’ve been warned…

Boulder 812 with flap on

Boulder 812_ the heatsinks are a distinctive mark of Boulder amps.

You can download other free and more user-friendly apps, such as mConnectLite, which allows you to quickly access Tidal and Qobuz without needing a computer

Boulder 812/Roon _all PCM signals (including MQA) are converted to 352,8kHz by default.

Boulder 812/Roon_ all DSD signals are converted to PCM352,8kHz by default.