Testing Wilson Audio speakers becomes more embarrassing with each new model when reviewers are confronted with previous accolades for sonic perfection. Perfection cannot be improved, or can it?

Daryl Wilson seems to take a secret pleasure in proving us wrong every five years. The Alexia V is a much better speaker than the Alexia 2, which was supposedly already perfect.

For Daryl, perfection is a matter of the soul before it is a state of mind, as it has been for Dave Wilson in the past. That is what sets them apart: Wilson Audio speakers have a soul.

And souls can also be improved, if you treat the body well.

Wilson Audio speakers have a soul. And souls can also be improved if you treat the body well.

I am tempted to commit the heresy of declaring Wilson Audio's Alexia Series 2 a better speaker than the earlier and much more expensive Alexx floorstander I tested under the same basic conditions [HFN Nov 16]. Of course, there will always remain the important question of scale. Nevertheless, it at least explains the need for Daryl Wilson to consider an "Alexxieva" in the near future...

Two years later, the prophecy was fulfilled, and the "Alexxieva" was unveiled under the name Alexx V. Continuing the family tradition, Alexia V uses many of the technologies developed for her elder sisters.

Having already heard the Alexx V playing (video above), I still feel that the Alexia V also offers a better balance between (domestically acceptable) size-and-sound quality, albeit with the caveat of a smaller scale and therefore less impressive soundstage.

The Alexia V thus joins the SabrinaX at the top of my short list, with the Wamm Chronosonic remaining unbeatable and unforgettable - and unfortunately unattainable – on mount Olympus, home of the gods of sound, where it resides.

Note: I regret not having yet had the opportunity to hear the Wilson Audio Chronosonic XVX playing.

I once wrote that in the Wilson family, the youngest wear the clothes and shoes of the elders. This "evolutionary continuity" guarantees that all Wilson Audio speakers share the same pedigree. Continuing the family tradition, Alexia V uses many technologies developed for her elder sisters. 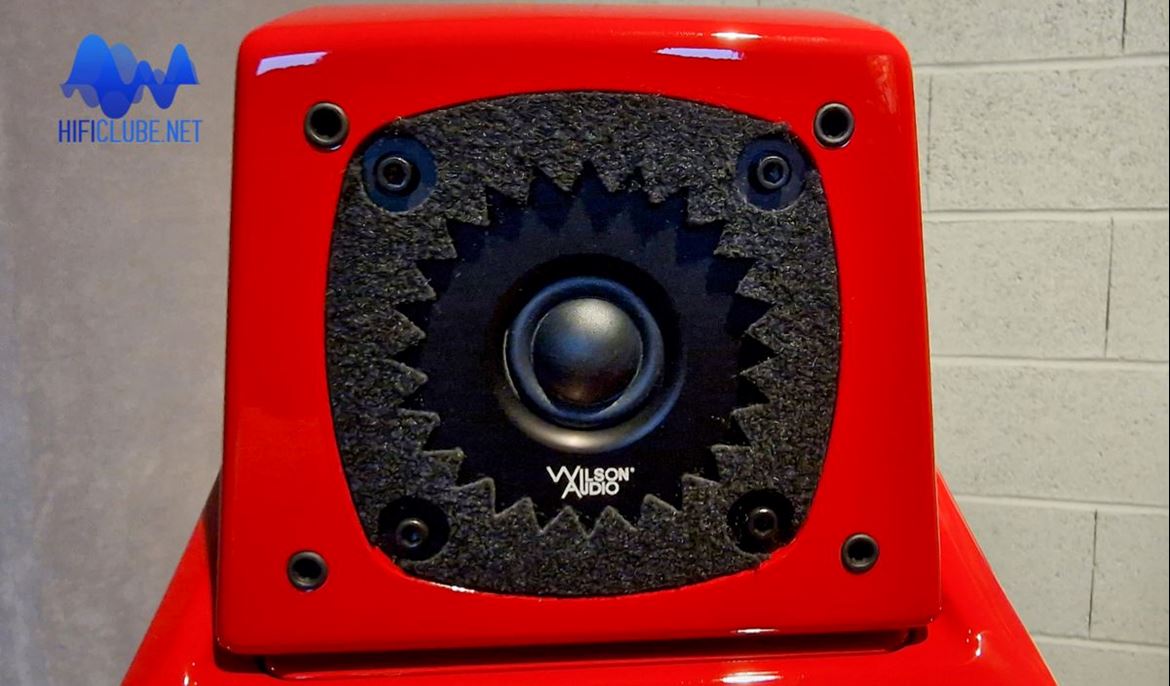 The Alexia V has inherited from the Alexx V not only the surname, which stands for the V-material initially developed for the XVX, but also the Wilson Synergy Carbon (CSC) tweeter, whose rear chamber is made of carbon fibre using a 3D printer.

From the Chronosonic XVX, the Alexia V inherited the QuadraMag midrange driver with Alnico (aluminium-nickel-cobalt) system, but with a single magnet instead of the double magnet used in the XVX. 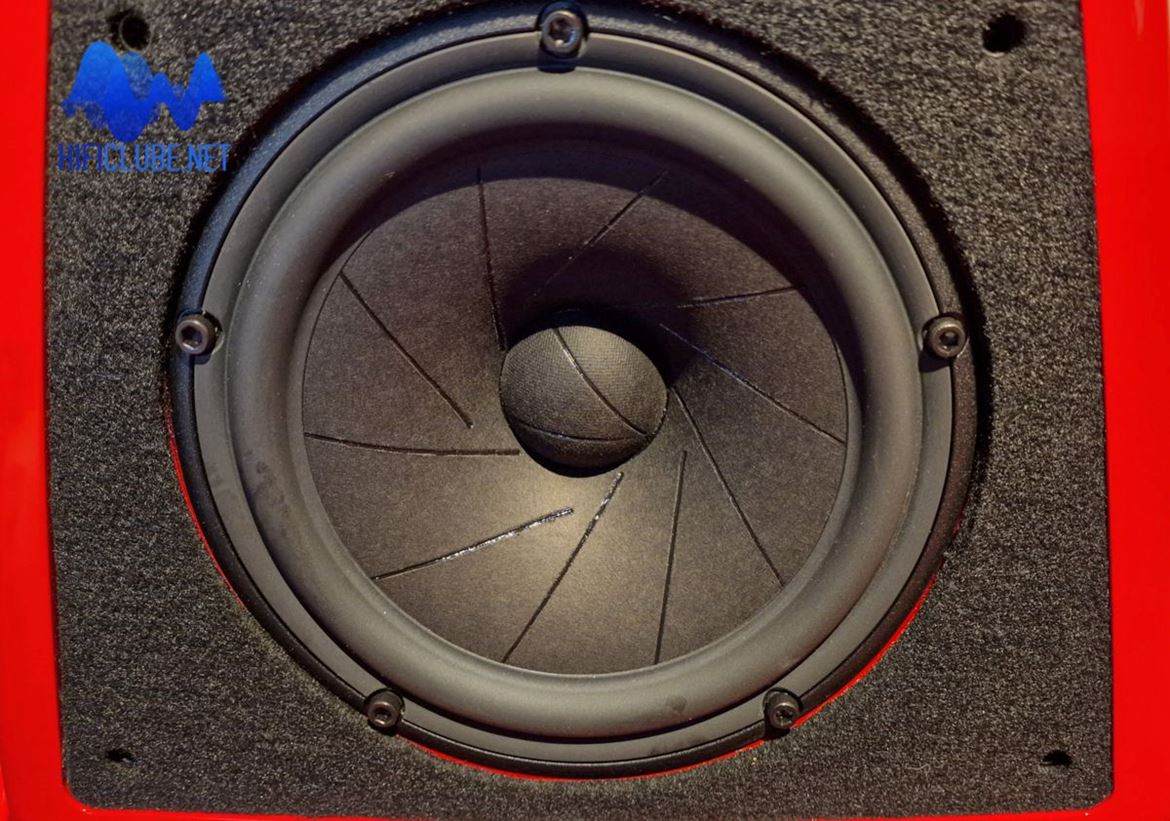 From the Chronosonic XVX, the Alexia V inherited the QuadraMag midrange driver with Alnico (aluminium-nickel-cobalt) system

The custom AudioCapX- WA capacitors used in the crossover are manufactured in-house with tight tolerances to ensure higher resolution throughout the system.

As with the XVX and Alexx V, the new binding posts accept banana plugs and spade connections. 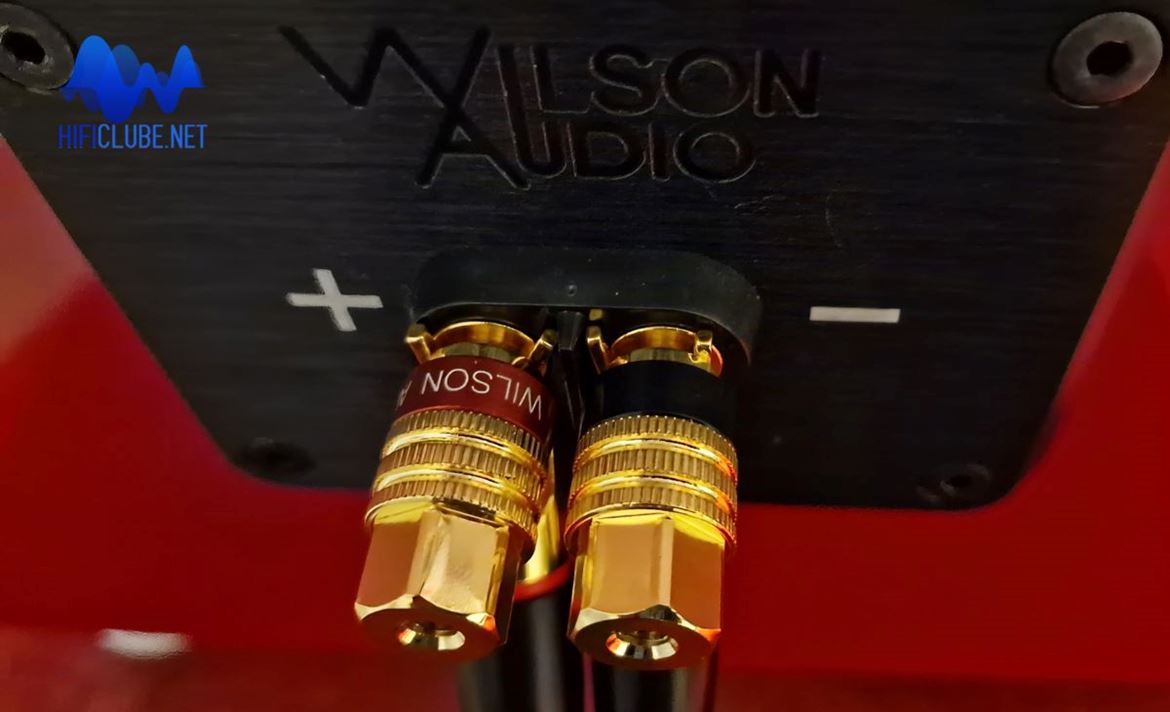 The changes to the crossovers have slightly improved the impedance from 2.54 ohms to 2.59 ohms at 84 Hz. The sensitivity of the Alexia V has also been improved by about +1 dB compared to the Alexia Series 2 model.

Nevertheless, the Alexia V delivers better performance with high-current amplifiers. Following the excellent results with the Alexia 2, a pair of Dan D'Agostino Progression was used again.

The internal volume of the midrange module was increased by 6.4% to achieve a more open sound in this critical frequency range.

In addition, the Alexia V is one inch (2.5 cm) deeper than the Alexia 2, giving the bass module an 8.9% larger internal volume for better extension.

The midrange module has a more streamlined design to reduce diffraction further, while the alignment bridge is reinforced with X-Material and aluminium to eliminate vibration.

And there is something else that is not noticeable at first glance: the bass baffle is slightly tilted backwards. For this tilt to create the proper alignment effect, the Alexia V must be perfectly levelled, which is why there is a bubble level on the back - not just for decoration... 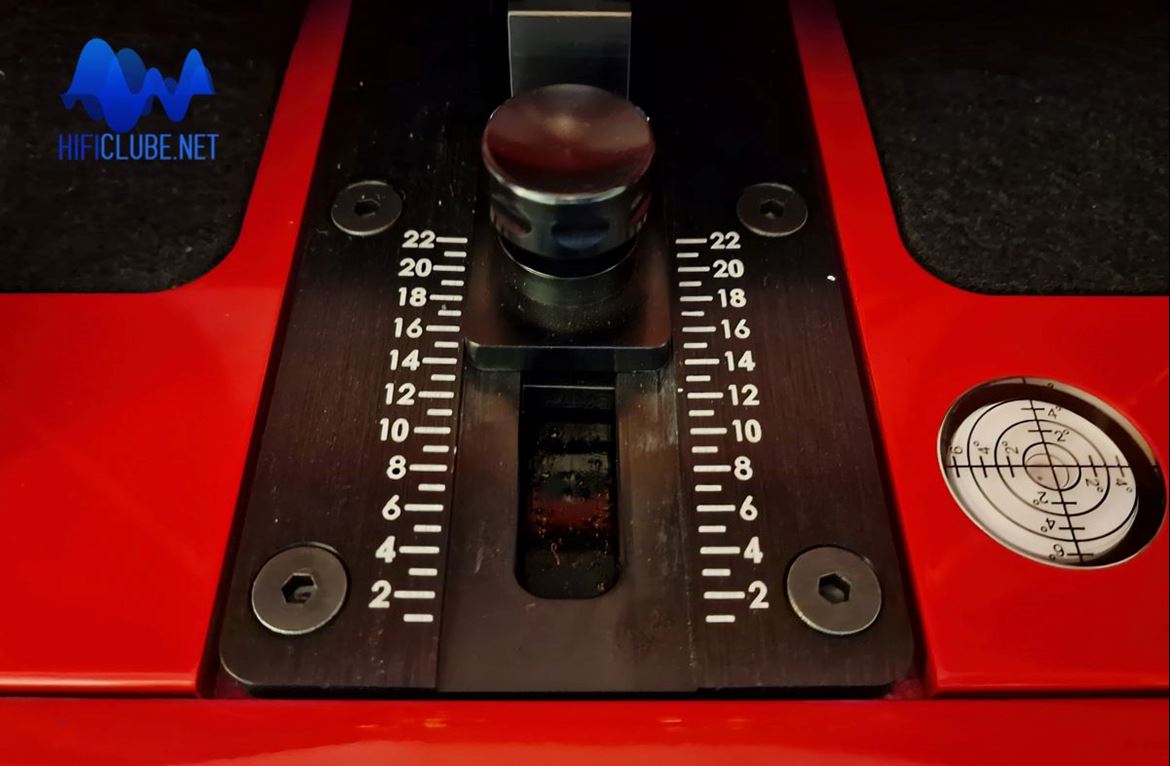 There is a bubble level on the back - not just for decoration...

Interestingly, the Alexia V has also inherited something from the Sasha DAW: the cutouts found on the top of the woofer blades, where the midrange module sits, allow for better ventilation and airflow, reducing standing waves pressure.

The geometric phase calibration on the top of the tweeter is much more precise now to ensure good timing. A new stylised alignment “staircase” block has been developed for ease of visibility during installation. 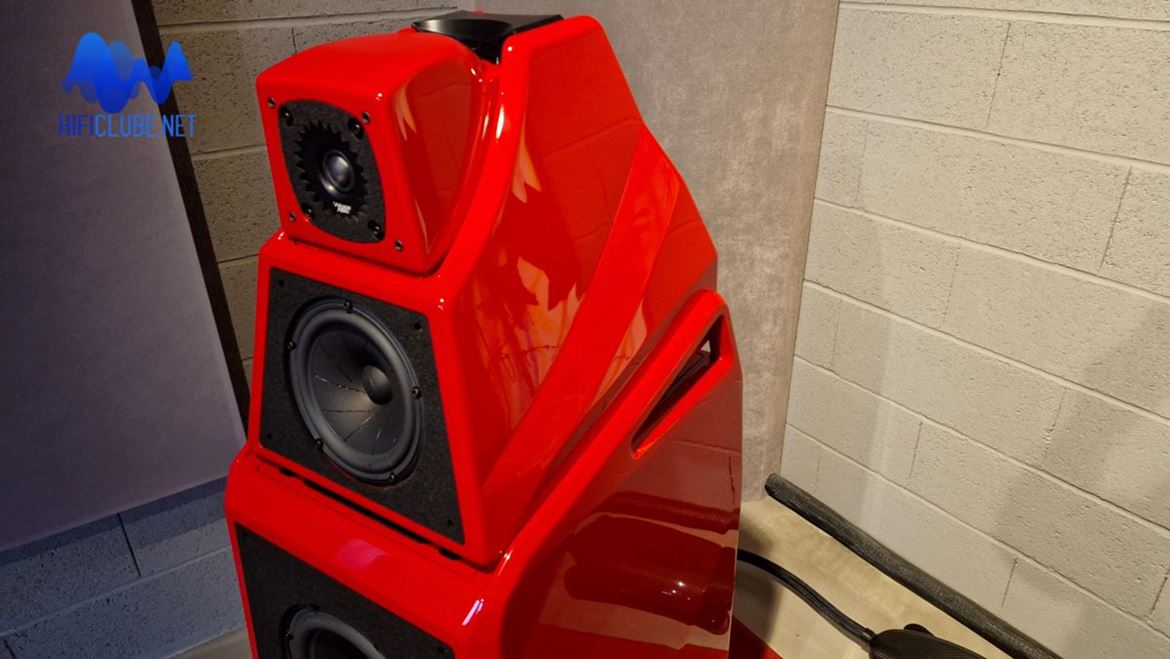 From the Sasha DAW, the Alexia V got the cutouts found on the top of the woofer blades,

Alexia V follows in the footsteps of her elder sisters and wears the same shoes. The price of 96,000 euros already includes the Acoustic Diodes for support and vibration damping, which previously had to be paid separately. And an all-new spike system featuring a combination of austenitic stainless steel and V-Material.

Nevertheless, the price increase is considerable. However, I am convinced that the current owners of the Alexias 2 will opt for the upgrade as soon as they hear the unbelievable magnitude of the difference in overall performance.

The Alexia V is available in six basic colours but can be painted any colour on request. The painted Pearl is the most expensive option, and its finishing is very costly and time-consuming. And the Ferrari red will not go unnoticed in any audio shop. 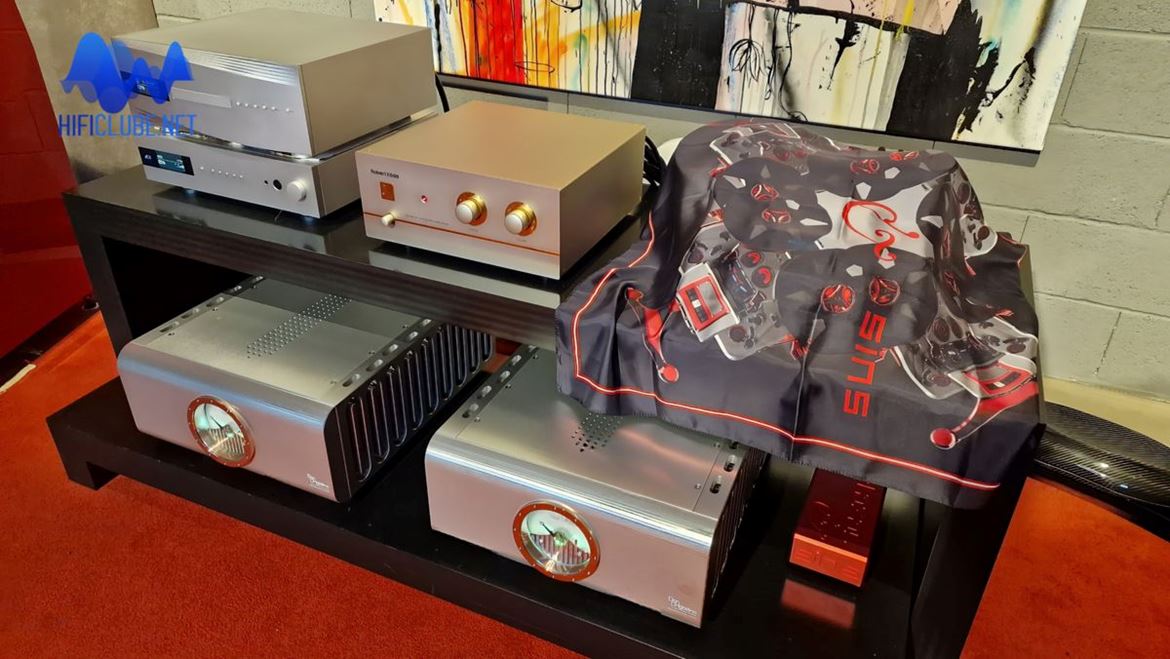 Alexia V were driven by a pair of D'Agostino Progression II monoblocks, the latter driven in turn by an exclusive Robert Koda Takumi K 15EX preamplifier, with dCS Bartok and Rossini as digital sources.

As the Anglo-Saxons say: "The taste of the pudding is in the eating".

Manuel Dias, president of Imacustica, introduced me to Alexia V in Auditorium 2 (medium-sized room), driven by a pair of D'Agostino Progression II monoblocks, the latter in turn driven by an exclusive Robert Koda Takumi K 15EX preamplifier, with dCS Bartok and Rossini as digital sources.

A secret analogue source, which will be the star of the official presentation on 19 November at Imacustica in Lisbon, was also on active display, albeit covered with a silk scarf for the photos. Of course, everyone already knows what’s underneath the scarf, but I promised to keep it a secret...

I sat down to listen in the company of Miguel Azevedo, a professional musician converted to audiophilia and now working at Imacustica. I had a CD-R with all the tracks I used in the Alexia 2 review.

It was a different room than the one used for the Alexia 2 test, and so was the system. However, the amplifiers were also Dan D'Agostino Progressions, so I only needed one more thing in common: the tracks I had used in the Alexia 2 test.

Unlike the Alexia 2, the V was not on trial. It was just a first listen to get the hang of it. But I could immediately hear the differences that the many changes described above made to the sound. 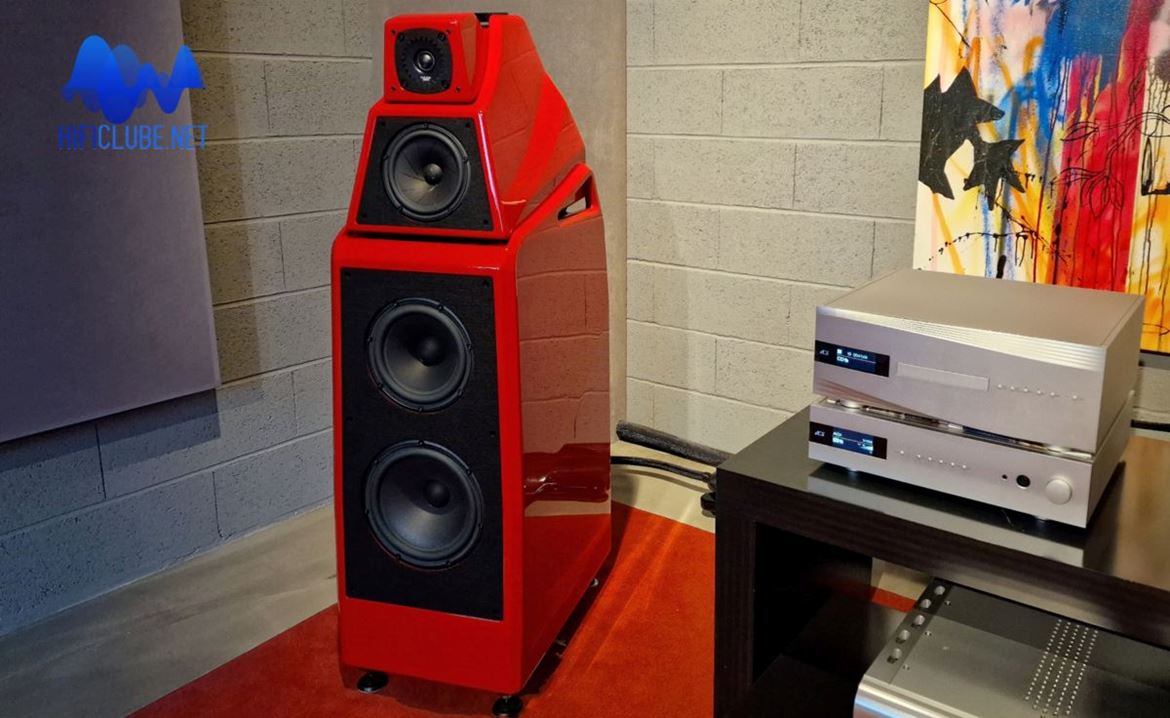 The Alexia V breathes better and sounds more relaxed under stress; it goes deeper and has an even more natural sound. Above all, it is more dynamic, and by that, I do not mean the ability to bring Kendrick Lamar's "Humble" to live concert level or wowing us with L.O.V.E. sung by the unforgettable Nat King Cole. I mean harmonic expression in general with all music genres.

… Alexia V breathes better and sounds more relaxed under stress; it goes deeper, and has an even more natural sound…

The micro detail and ambient retrieval are truly exceptional, as Wilson Audio says. It makes the decay fade into a pitch-black background silence, possibly due to the higher resolution of the tweeter as well as the greater rigidity of the overall structure; and also to the use of V-material on the top of the bass module, which better isolates it from the already V-Material reinforced midrange module, where the QuadraMag works its magic undisturbed. 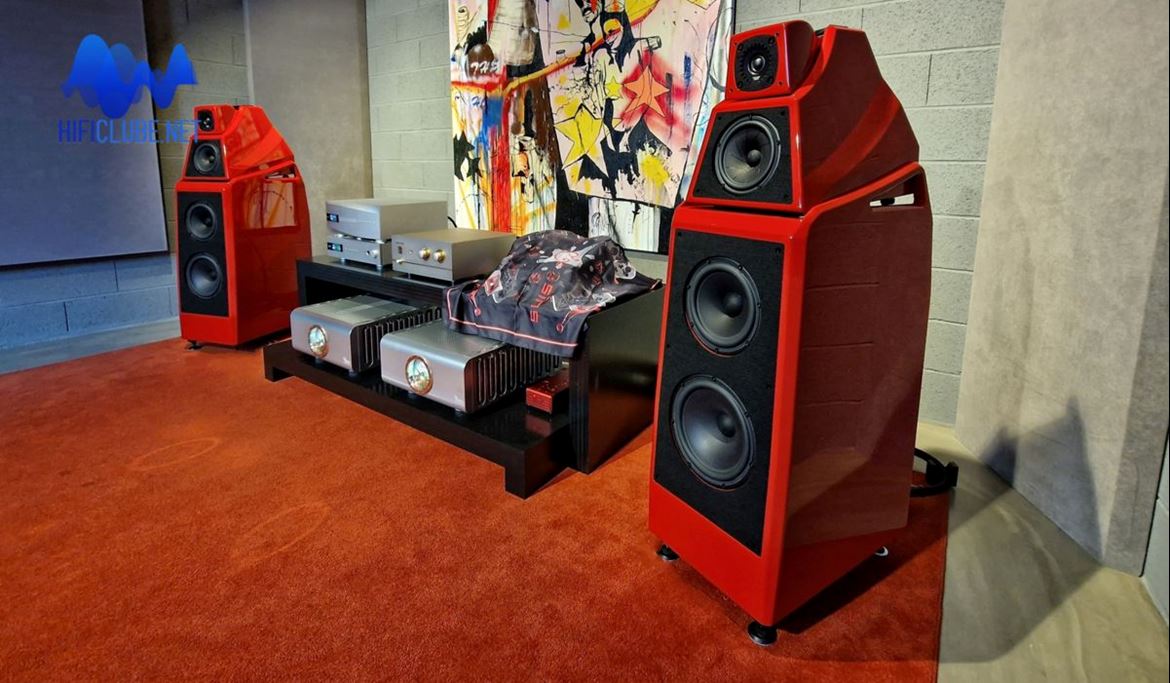 The decay fades into a pitch-black background silence.

They can put us right in the concert hall with good live recordings, reaching a level of realism that I have only experienced with the Wamm Chronosonic. And that is a bold statement!

For the Alexia 2 test, I coined an English word to define their cohesion and harmony: togetherness.

I chose (artistic) Solidarity for Alexia V because this is not just another high-end speaker but “a lovely work of art” dedicated to reproducing music. And art is the unifying cement of humanity.

Tickets for the official presentation on the 19th of November will “sell” out quickly, just like Coldplay concerts (contact Imacustica). Only the age group will be much different...

And now, about the listening session video, which you can watch below.

My first recorded sample at Imacustica was "Humble" by Kendrick Lamar, and it sounds fantastic, proving that Alexia can play hardcore music at an insanely high level. But the language is inappropriate (too many F-words). So, I rejected it.

Instead, I open with the Freddie Hubbard Band, an analogue track converted to PCM384kHz, followed by a DSD file of Beethoven’s Sonate nr. 32, Op. 111 by the pianist Tor Espen Aspaas.

Finally, Nat King Cole sings "Mona Lisa", a lovely work of art, and closes the video soundtrack (recorded "live" in-room at Imacustica). This is as close to "live at Imacustica" as I can get you. Have fun! And if you can show up at Imacustica on the 19th of November.

Note: I independently recorded video images and the soundtrack for the best results.

(watch in 4K full screen with headphones and a good DAC)

From the Chronosonic XVX, the Alexia V inherited the QuadraMag midrange driver with Alnico (aluminium-nickel-cobalt) system

There is a bubble level on the back - not just for decoration...

From the Sasha DAW, the Alexia V got the cutouts found on the top of the woofer blades,

Alexia V were driven by a pair of D'Agostino Progression II monoblocks, the latter driven in turn by an exclusive Robert Koda Takumi K 15EX preamplifier, with dCS Bartok and Rossini as digital sources.

The decay fades into a pitch-black background silence.