Skip to content
Home
/
Artigos
/
Reviews Testes
/
PRIMALUNA EVO300 HYBRID by Floyd : the bright side of the moon (English version)

Legend has it that the ideal amplifier is the one that manages to marry the fluidity of valves with the power of transistors. With the EVO300 Hybrid Integrated Amplifier, PrimaLuna has fulfilled its prophecy: it sounds more like a "piena luna" (full moon) than a prima luna ...

I have been closely following Herman van den Dungen of Durob Audio since he showed and demonstrated the PrimaLuna valve amplifiers for the first time in Las Vegas in 2003.

Since then, I have never missed a demo again. Almost always with Sonus faber speakers, in a dark room, only lit by the incandescence of the valves and Christmas lights scattered on the floor. Playing rock music - and not classical, as one would expect from such components.

Over the years, I've happily lived with several PrimaLuna valve amplifiers. And I've written about them often, always with the enthusiasm that their quality-price ratio aroused worldwide.

In the beginning, it was DN

Also, in DN (a Portuguese national newspaper), an article entitled 'Quando o Sol Nasce...' about the ProLogue One amplifier was the only one ever published in the national daily press simultaneously in the English language as 'When the sun rises...'.

Note: you can open both the English and Portuguese versions in pdf format by clicking on their respective titles at the bottom of this article.

From China with love 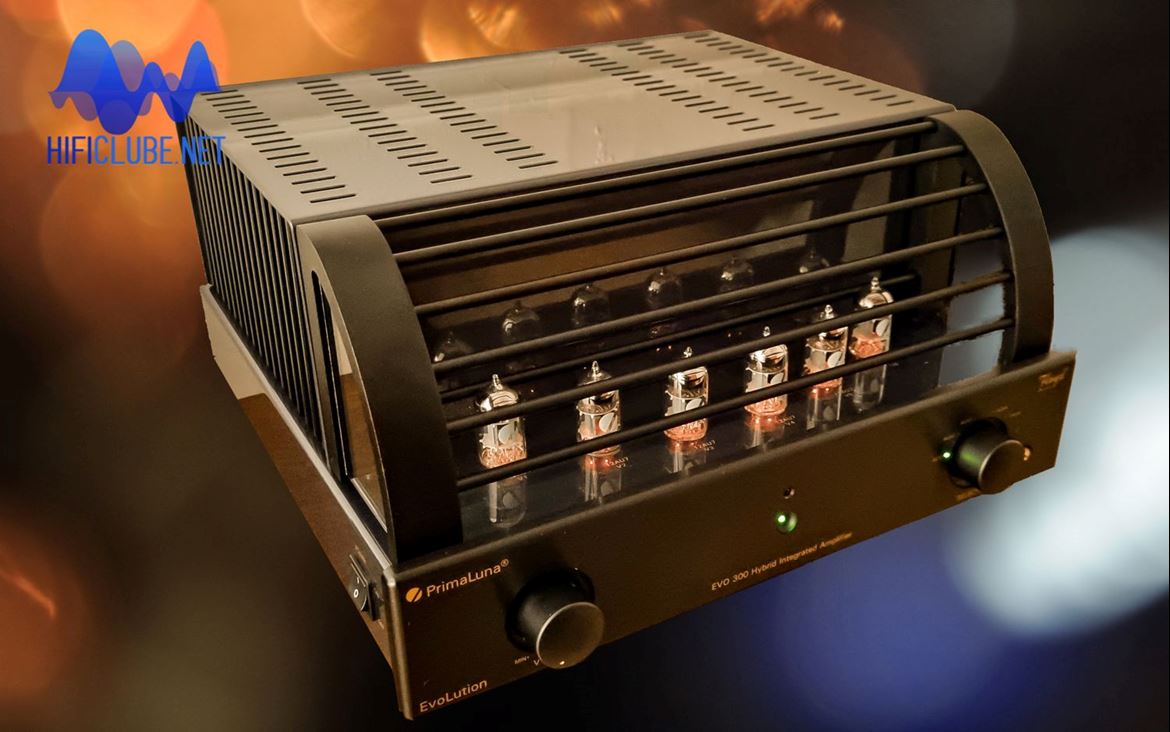 Although designed in The Netherlands, the PrimaLuna amplifiers are built in China, making them affordable by audiophile standards. A market where amplifiers of similar features and less robust construction can cost tens of thousands of Euros.

I recently tested for Hificlube the EVO 400 Integrated, and we awarded it the 'Valve Amplifier of the Year 2020' Award.

The EvoLution line consists of 13 models, including preamps, integrated amps, and power amplifiers, all of which are valve-driven or use valves such as the DAC.

The EVO 300 Hybrid Integrated is the brand's first (and, for now, only) hybrid model, in which it has opted to use valves in the pre-stage and MOSFETs in the power stage.

The warm glow of the power valves that illuminate the room like a fireplace-heating is lost but replaced here by red LEDs that let the interior fire escape through the protective grilles.

... the gentle glow of the six-valves front stage allows one not to miss so much the integral vacuum technology ...

And why not amber or orange, like the valves? It seems that red LEDs are the ones that least interfere with the circuits.

I think it's a little 'kitschy' and dispensable detail.

In the dark, the soft incandescence of the six valves in the pre allows one not to miss so much the integral vacuum technology.

Pure PrimaLuna with a little help from Floyd Design

The valve circuits (based on the EVO 300 valve integrated preamplifier stage) are by Marcel Croese (ex Goldmund). He opted for double 12AU7 triodes (from Psvane) instead of the usual 12AX7, six in number: two for the first gain stage and four (instead of the usual two) on the output stage, ensuring a lower impedance and being consistent with the solid-state circuit.

The solid-state (dual-mono) circuits are designed by Jan de Groot, chief engineer at Floyd Design, Dutch, like Marcel and Herman. He uses cascaded JFETs (from Linear Systems) in a Darlington topology, with two complementary MOSFETs (custom made by Exicon) to guarantee immunity to impedance variations in the speakers.

Thus, you get a declared power of 100W/8 and 160W/4, which, in practice, turned out to be very conservative: the actual - and emotional - perceived power is much higher, even though the main power transformer is only 500VA, which thanks to the AC Offset Killer circuit, is silent - no audible hum.

It should be noted that the pre-section, with a symmetrical dual circuit, has its own power supplies, including transformers, hence the substantial 29 kilos weight of the set.

The few (only the indispensable) circuit boards with gold-plated copper tracks are twice as thick as usual (2.4mm). Otherwise, all connections are made point-to-point by hand soldering.

All components are of the highest quality:

All this to partly justify the high price, by PrimaLuna standards, of €7,150.00, as if the sound quality wasn't already enough. 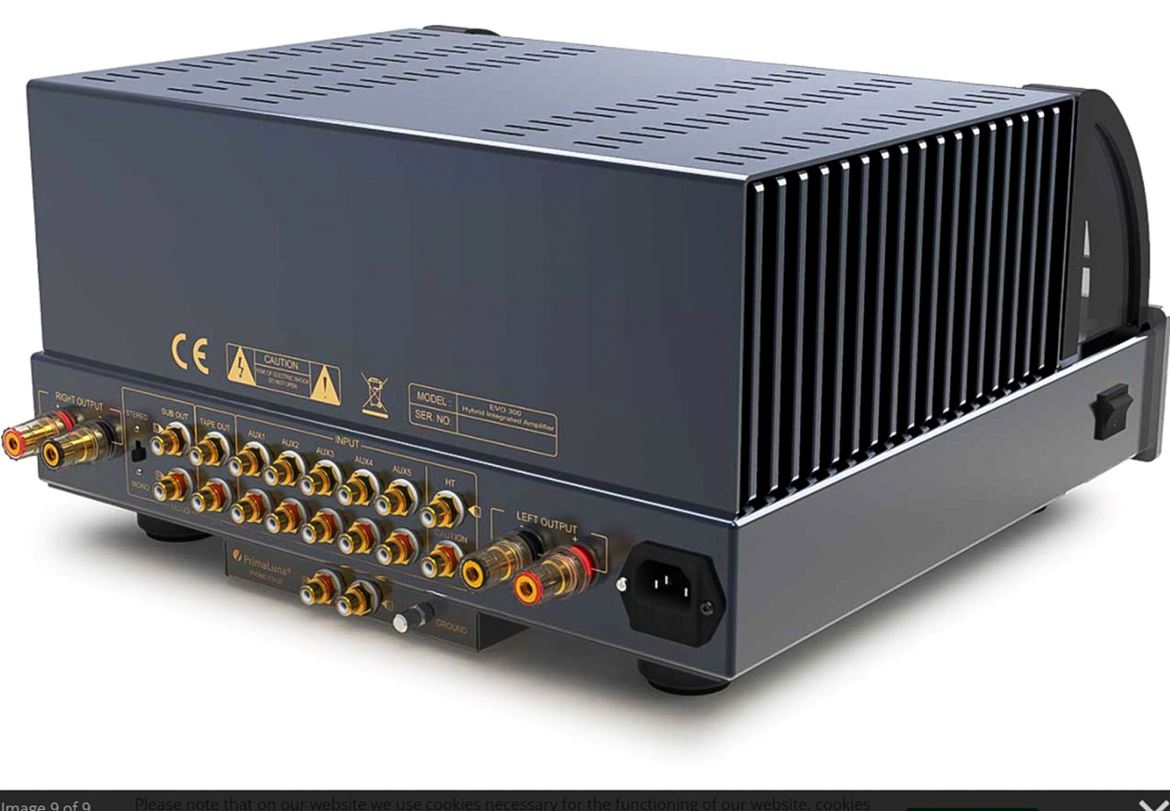 The EVO 300 Hybrid has an optional Phono Box for an optional PhonoLogue. Furthermore, there are 5 line inputs (labelled Aux 1 to 5 + HT). The circuit immediately detects if only one is connected, and its green led lights up on the selector.

Note: The potentiometer does not control the sound level on the Home Theatre input, please, be careful.

Outputs for Tape Out and Subwoofer Out (mono or stereo) and LS/HP (headphones), with a switch mounted on the right-hand side of the box and On/Off on the left-hand side, both seen from the front. 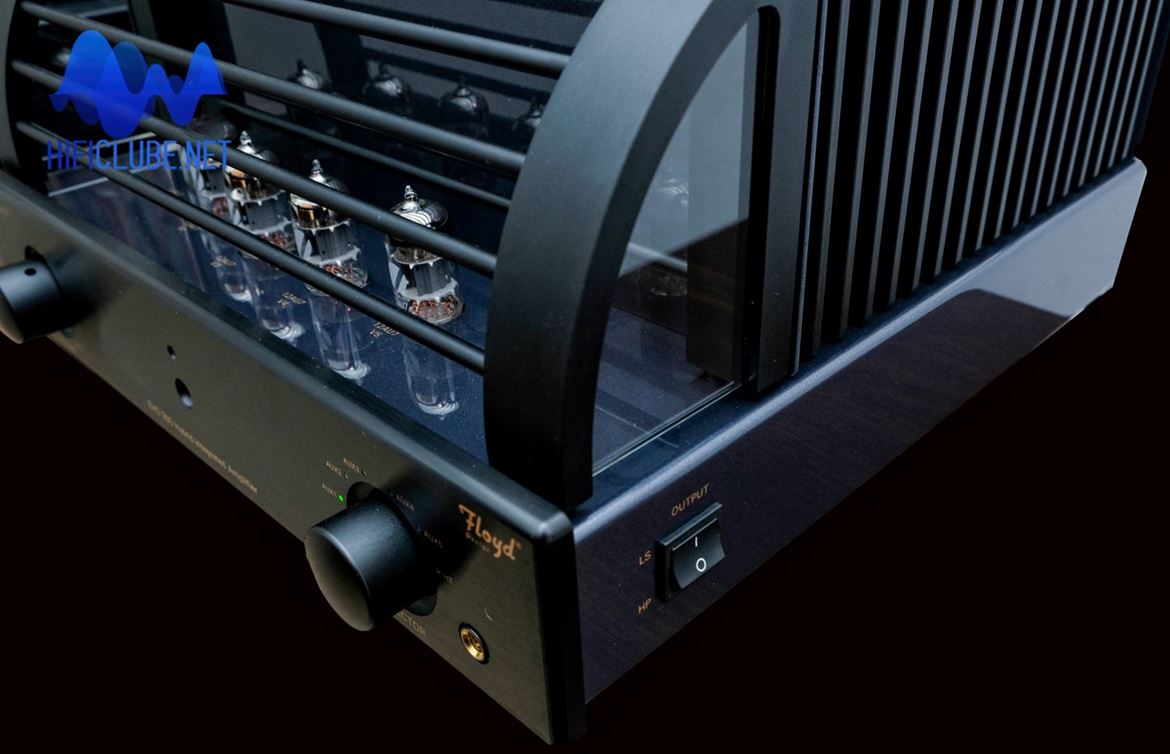 PrimaLuna EVO3 00 Hybrid - You can find the switch for the headphone output on the right side. The power does not switch by simply inserting the headphone jack.

The headphone amp has a warmer sound (valves?) and enough power to drive isodynamic planar headphones like the Hifiman and Meze (I'm preparing an Empyrean/Elite comparison).

A timer system for valve pre-warming and automatic circuit analysis keeps the EVO 300 muted (red led) for about 1 minute until activated (green led). And then the party can start.

The party is about to begin 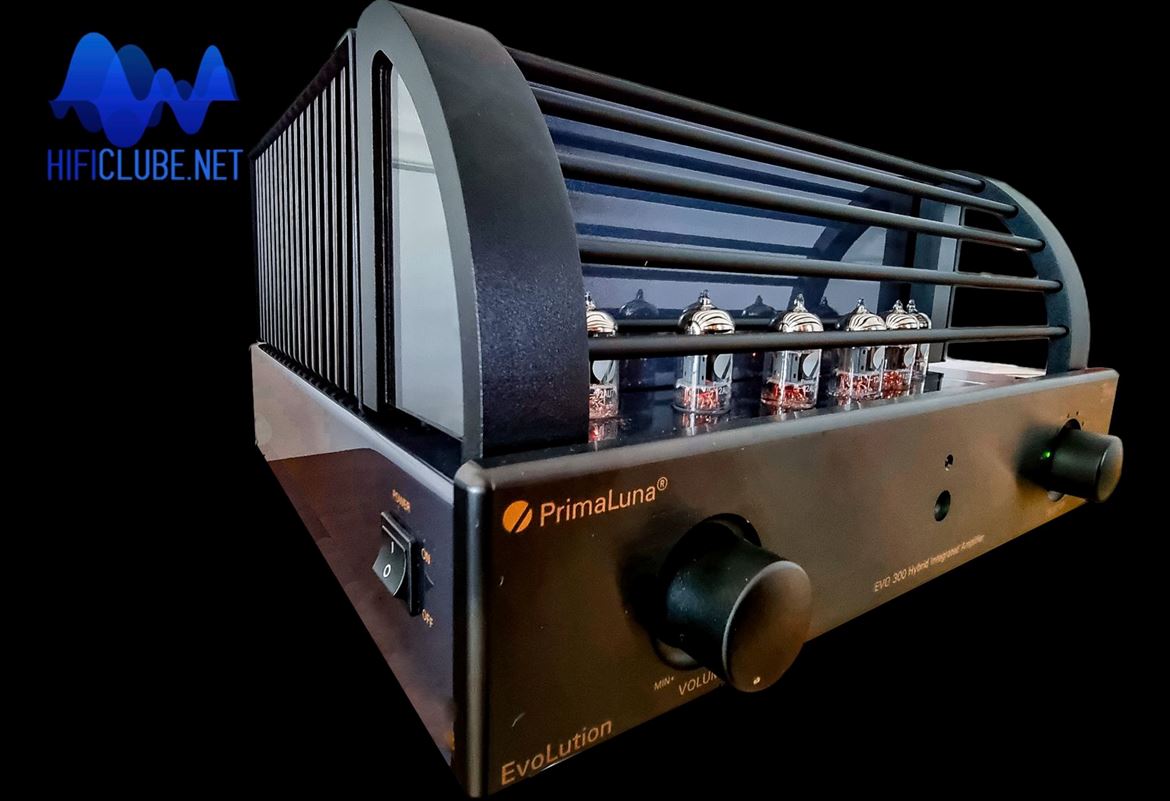 And what a party it will be.

...PrimaLuna EVO300 Hybrid Integrated is the best PrimaLuna ever...

More, it is one of the best integrated amps I've heard this year. And don't forget that I've listened to, among others, the DarTZeel CTH8550 and the Constellation Integrated 1.0.

Considering it costs a fraction of the price, you do the math...

The glow of power valves is partially lost, and the sound does not have the same general luminosity of vacuum models: it is darker.

But it is a blackness of silence. The images appear clean, tangible, and cut out by their intrinsic inner light, and the 'tactile' sensation allows us to perceive the volumes, the contours, and the minor acoustic details.

Floyd Design has achieved the miracle of retaining all that magic, fleshy, palpable valve midrange, supported by solid-state authoritative, and controlled bass; perhaps only the treble doesn't have the same fluidity.

In contrast, the high frequencies have a substance that escapes even the valves, as if it were an integral part of the midrange and not a mere acoustic accessory.

The dynamics are extraordinary, and more than once, I found myself running to the volume knob as the sound rises without warning, responding to the demands of the signal.

The image is holographic, in the sense that the more we look (listen), the more we immerse ourselves in its complexity and realize its multiple components.

A matter of phonetics

I'll give you an example of a complex studio mix: in Supertramp's 'It's Raining Again', you can't always make out the traditional children's song that the children's choir sings at the end:

The EVO 300 Hybrid allows us to 'see', hear and understand what they sing without missing a syllable.

It's raining, it's pouring
The old man is snoring
He went to bed and bumped his head
And he couldn't get up in the
Morning

Listen now to Handel's 'Messiah', in Gardiner's version, with a female chorus, following the libretto:

These verses of the libretto are transcriptions from the Bible (English translation, King James Version), and the underlined words keep the old spelling, such as crieth (cries), hath (has), and appeareth (appears).

The phoneme th at the end of each word does not sound like the s in current spelling. It is difficult for a foreigner to pronounce it (by letting the air escape with the tongue between the teeth). But not for the singers and the choir who, being English, pronounce it perfectly, of course.

But not all amplifiers give us the complete picture of that perfection, especially amid an orchestral mass and a choir singing at the top of its lungs. Some confuse the th and the s...

The same is true for the phonation of the vowels with an umlaut in sung German: especially ö and ü, whose correct pronunciation (with lips pursed halfway as to kiss) immediately distinguishes a native speaker (singer) from a foreigner, especially Latin speakers.

Listen to German tenor Jonas Kaufmann, Act I, Scene 3, from Wagner's 'Valkyrie' with the Berlin State Opera Orchestra, which opens like this:

Notice how he pronounces the o in höchster, listening with different equipment. Now go and listen with the EVO 300 Hybrid.

Or listen to 'JoJo', by Jacques Brel, to learn how to pronounce the curled Walloon 'r' (incidentally, all consonants, vowels, and diphthongs, all syllables are underlined in bold by Brel with a very slight Belgian accent) in:

Brel turned out to be alive, like Elvis, right there in front of me: the projection and presence of the voices is one of the EVO 300 Hybrid's many charms.

…The voices' presence is one of the EVO300 Hybrid's many charms...

State of the audio review 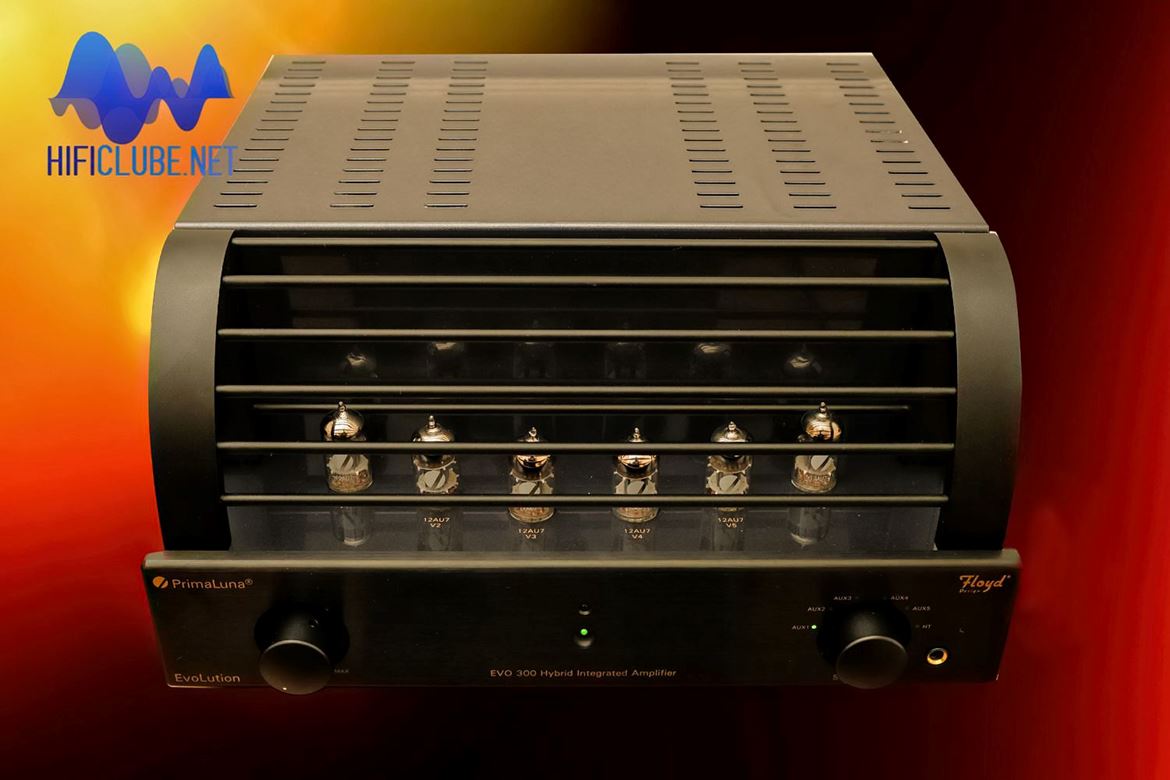 PrimaLuna EVO 300 Hybrid - the interior of the EVO 300 Hybrid lights up red to compensate for the lack of brightness of the valves on the power stage, here replaced by MOSFETs.

My phonetic approach to the sound of an amplifier is new and unique, and I admit too entropic. But it proves that the performance analysis is not exhausted in the measurements obtained by a computer, which knows everything about electrical signals but nothing about music for human use.

That all this is presented to us as an organic and logical complete package sounds like a miracle, especially with the combination of two different amplification technologies.

It sounds more like a piena luna (full moon) than a prima luna (first moon).

The EVO300 Hybrid is not a PrimaLuna but a 'PienaLuna'

Go and listen to it at a local distributor (Imacustica in Portugal), with a pair of speakers of your choice, and if possible, with the musical excerpts presented here. At worst, you spend some quality time, and in the end, you can always find me wrong and counter my opinion...

Below: See a historical video where in the first 10 seconds you can see Herman Van Dungen in lively conversation with Ricardo Franassovici (Absolute Sounds), Manuel Dias and Conceição Ferreira, of Imacustica (Venice, July 2010).

Note: translation revised and adapted by the author from the original in Portuguese published in November 2021.

PrimaLuna EVO3 00 Hybrid - You can find the switch for the headphone output on the right side. The power does not switch by simply inserting the headphone jack.

PrimaLuna EVO 300 Hybrid - the interior of the EVO 300 Hybrid lights up red to compensate for the lack of brightness of the valves on the power stage, here replaced by MOSFETs.

Prima Luna Prologue One When the Sun Rises