I have been listening to the Dione soundbar in my living room as a stand-alone unit, with a 55-inch Xiaomi 4K TV connected via an HDMI cable (ARC) as the only external source besides streaming. It does not need a subwoofer or support from rear satellites. By the way, Dione does not even offer the necessary connections.

Note: You can connect a Blu-ray player via an optical connection. Dione's algorithm then processes the PCM stereo signal into a virtual 5.1.2.

Dione is the best sound bar I have ever heard (including music, vocals and speech) once I had done the necessary auto-calibration and selected the acoustic modes best suited to each programme. 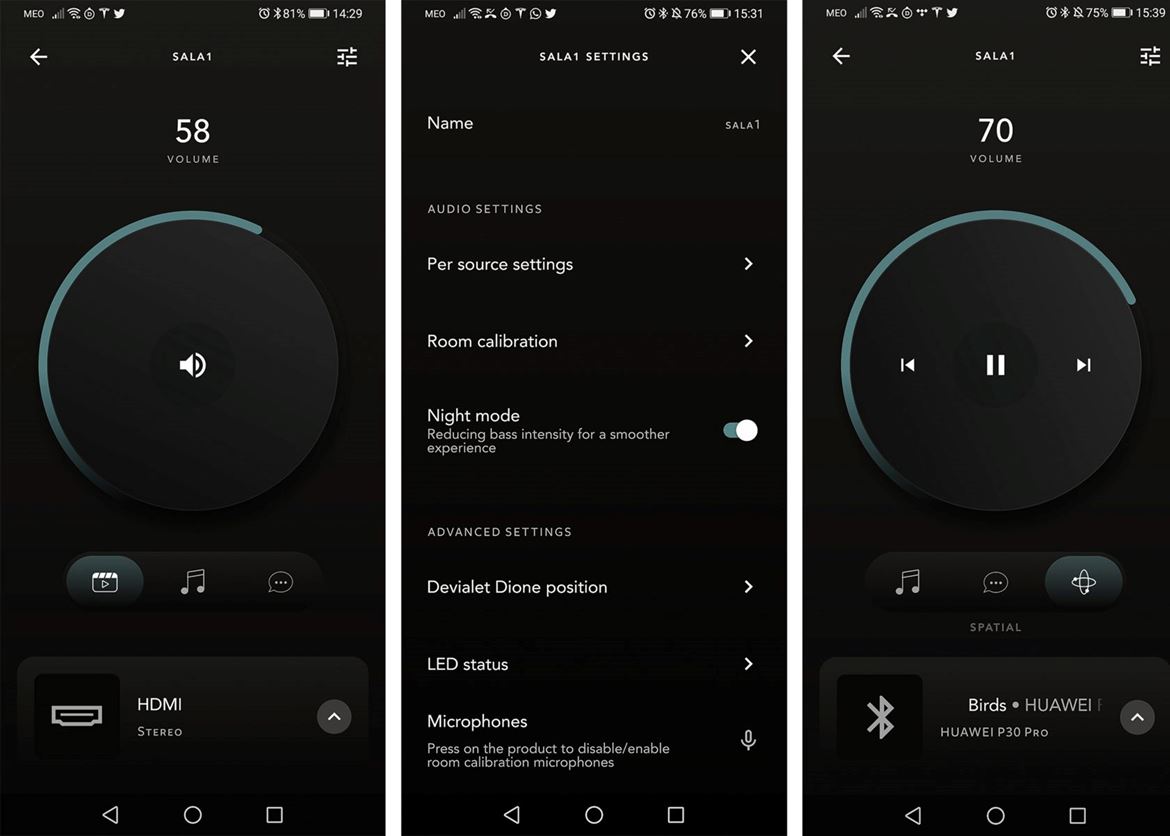 Devialet Dione is the only sound bar with real bass that lets you play action movies without a subwoofer. But unfortunately, the surround sound effect is only virtual. Therefore, ‘rear’ sounds are not entirely convincing. Still, it was "airy" enough to give the feeling of space around the screen and even the illusion of height!

Note: In a smaller room, the reflection of the nearby side walls could add more to the illusion of space sound. 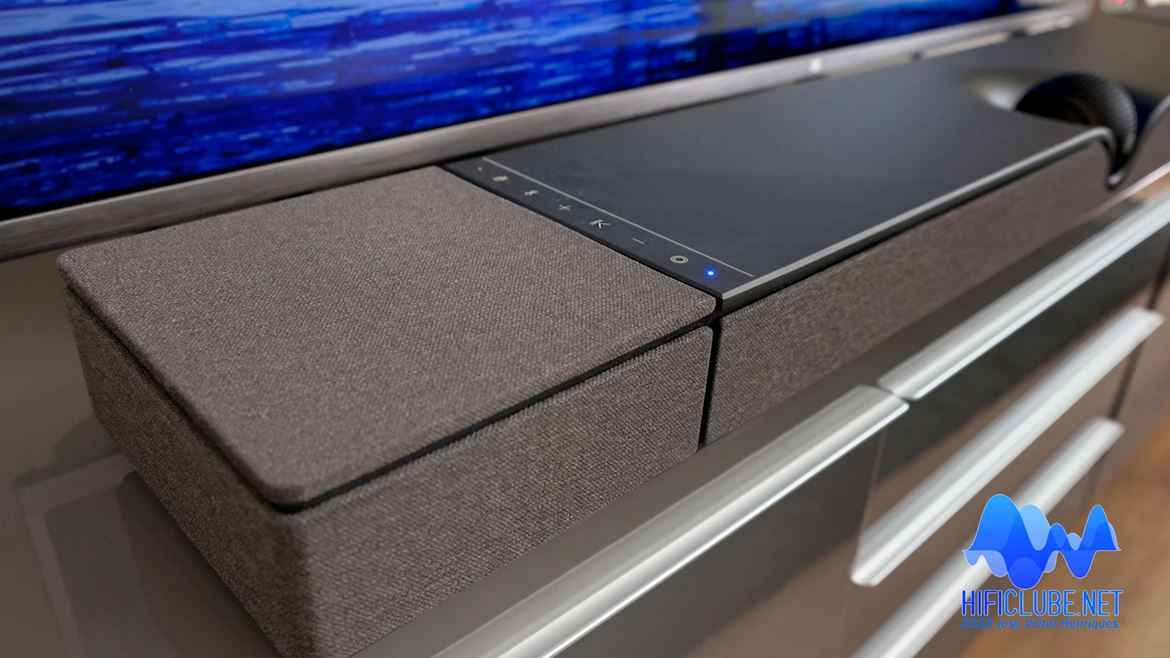 Dione: a sleek, discreet design that takes up no space.

Like everything that comes out of Paris, this unit has a luxurious price tag (€2 400). But it replaces an equally capable sound system with more than a budget advantage (ask your wife) because it has a sleek, discreet design and takes up no space: no subwoofers, no rear satellites, no cables to trip over halfway through.

Note: I placed Dione horizontally (see photos) under the TV on a piece of furniture of the same colour, where it is practically invisible. However, it is easily audible if you catch my drift. 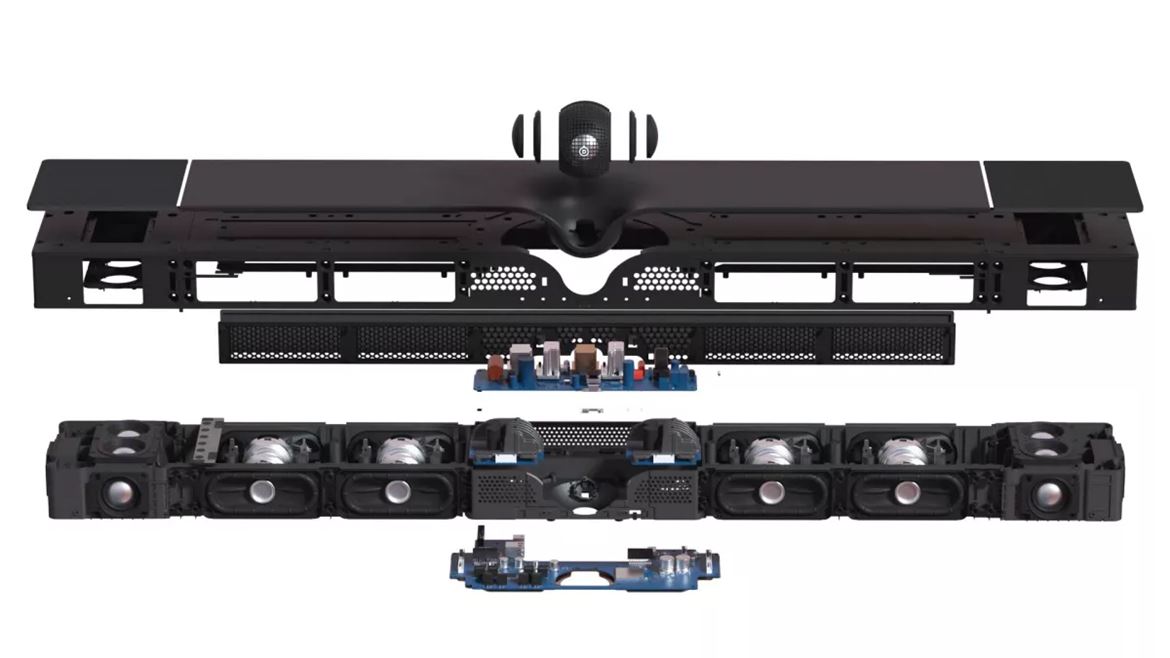 Dione is not just another sound bar. It is more like a ‘space base’ with 950W of firepower and an army of 17 speakers (see diagram): 9 41-mm full-range speakers, including the central ORB sphere, and four on each side at the ends: a front speaker, a side speaker and two upward-facing speakers (with Dione in the horizontal position).

The remaining eight are 133mm race-track shaped drivers mounted in two opposing pairs (front/rear) on either side of the ORB, delivering bass with gusto and energy. 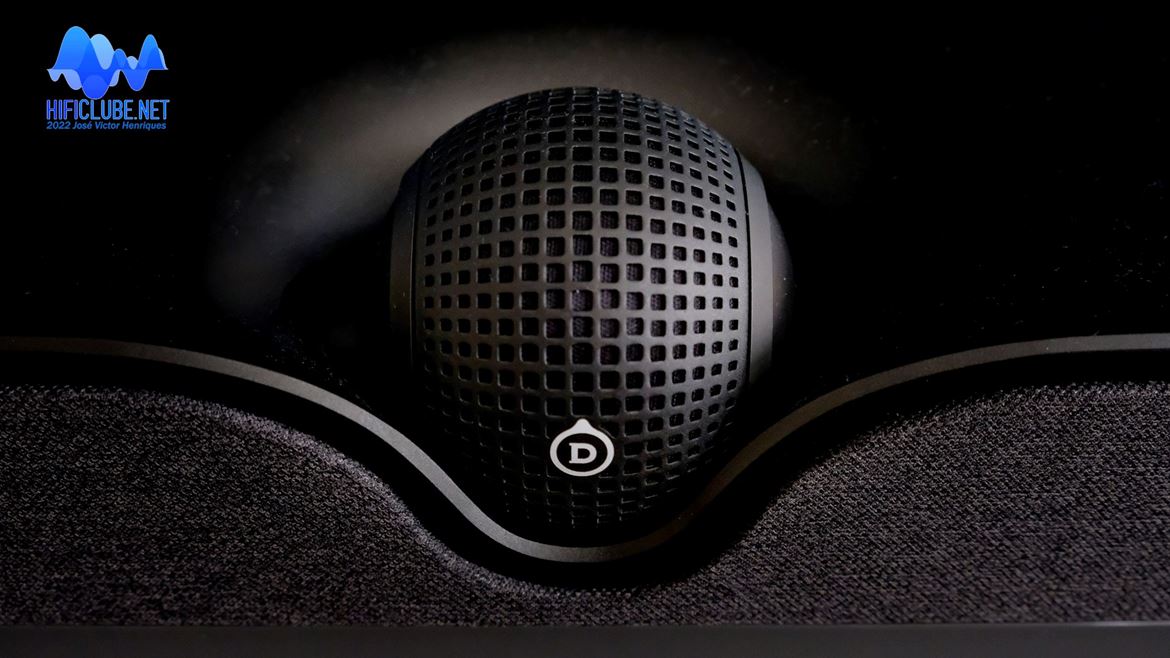 Dione: it's all about (and around) ORB.

It looks like the geometric blocks of a city (Urbi) flanking a spherical monument in the central square that symbolises the world (Orb(i), hovering above a vortex that shoots sound in all directions.

Note: You can also set up Dione vertically using the mounting kit. In this case, you must turn the central "sphere" clockwise so that the "D" symbol is visible. An internal gyroscope then takes care of the "positioning" of the other speakers.

Oblivion: the thrusters on Tom Cruise's ship are reminiscent of the ORB.

There is a clear hint of science fiction here. The spherical full-range speaker (in the best Devialet tradition), consisting of one active and two passive units, so they say, is reminiscent of Tom Cruise's spaceship engine thrusters in Oblivion (see photo). Come to think of it, the "drones" also remind me of the Phantom speakers (see the videos on YouTube).

The Oblivion soundtrack is Dione's forte: from the drone attacks to the explosions, from the sudden movements in the horizontal and vertical planes to the intelligible dialogue.

Perhaps it is no coincidence that the following message appears when the app discovers Dione in its HiFi network: ‘new life found’.

A question of mode


Dione does not come with remote control. Maybe it works with the Phantom remote; I do not know. When connected to a TV (ARC) you can raise or lower the sound with the TV control and 'Mute'. But not much else.
That's why it's crucial to download the app. With it, you can connect Dione via WiFi or Ethernet and turn it into a streamer.

You can access Spotify Connect or music via AirPlay2 (Apple devices only). If you use Android, you can access your files via UPnP. The alternative is Bluetooth, which, although it only uses SBC and AAC codecs, works quite acceptably with Tidal.

You can also select the appropriate mode in the app: Movies, Music, Voice and Spatial. Of course, nothing prevents you from watching the news with ‘Movies’ or always listening to music with ‘Spatial’, for example. But if you stick to the suggested modes, you will get better results. 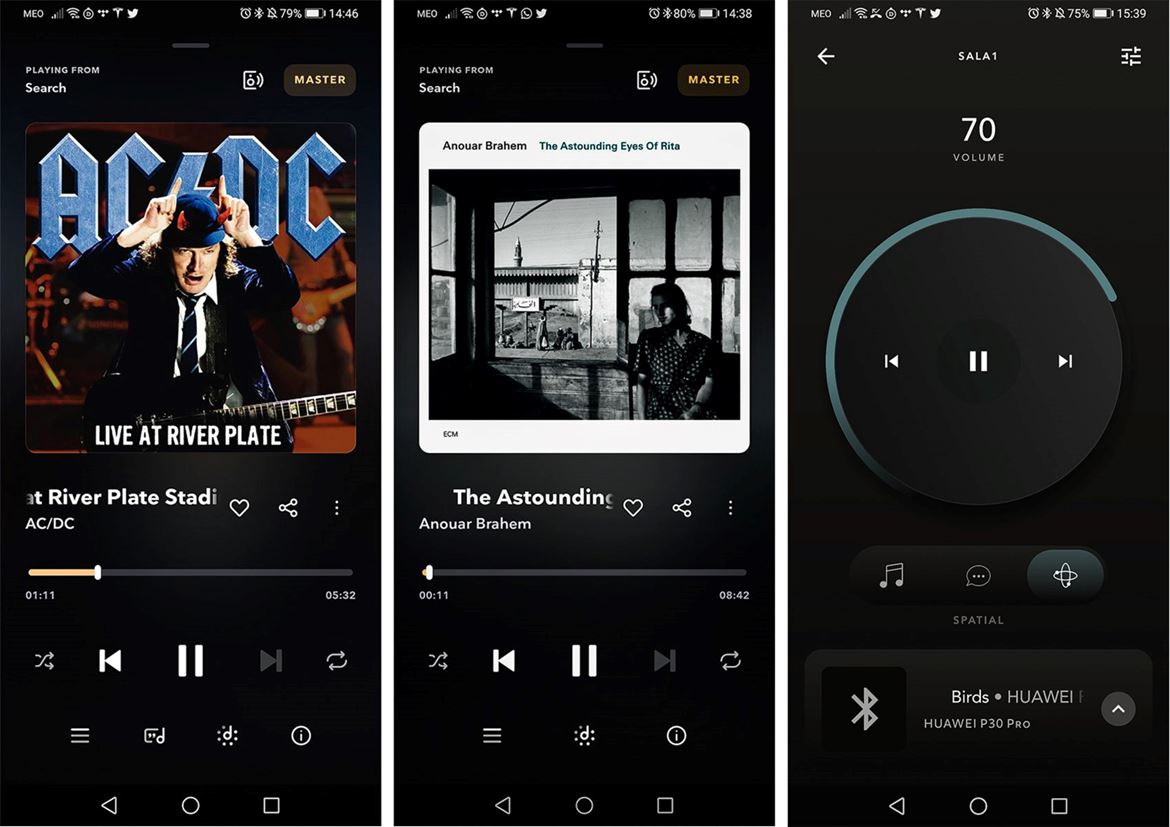 Live concerts and music with lots of ambience are candidates for Spatial mode.

The live recording of Jazz at The Pawnshop (Tidal) has even more atmosphere with Spatial. The same goes for the AC / DC Live at Buenos Aires. But if you push Dione too much in Spatial Mode, the sound can get a bit shrill and edgy sometimes.

Music with a lot of ambience, like The Astounding Eyes of Rita by Anouar Brahem, improves further with Spatial.
However, you should opt mostly for Music (stereo), as the sound is more coherent, focused, and natural. The same goes for live music videos like the excellent Tiny Desk Concerts. I have selected three concerts for you with lots of percussions and bass. Enjoy: 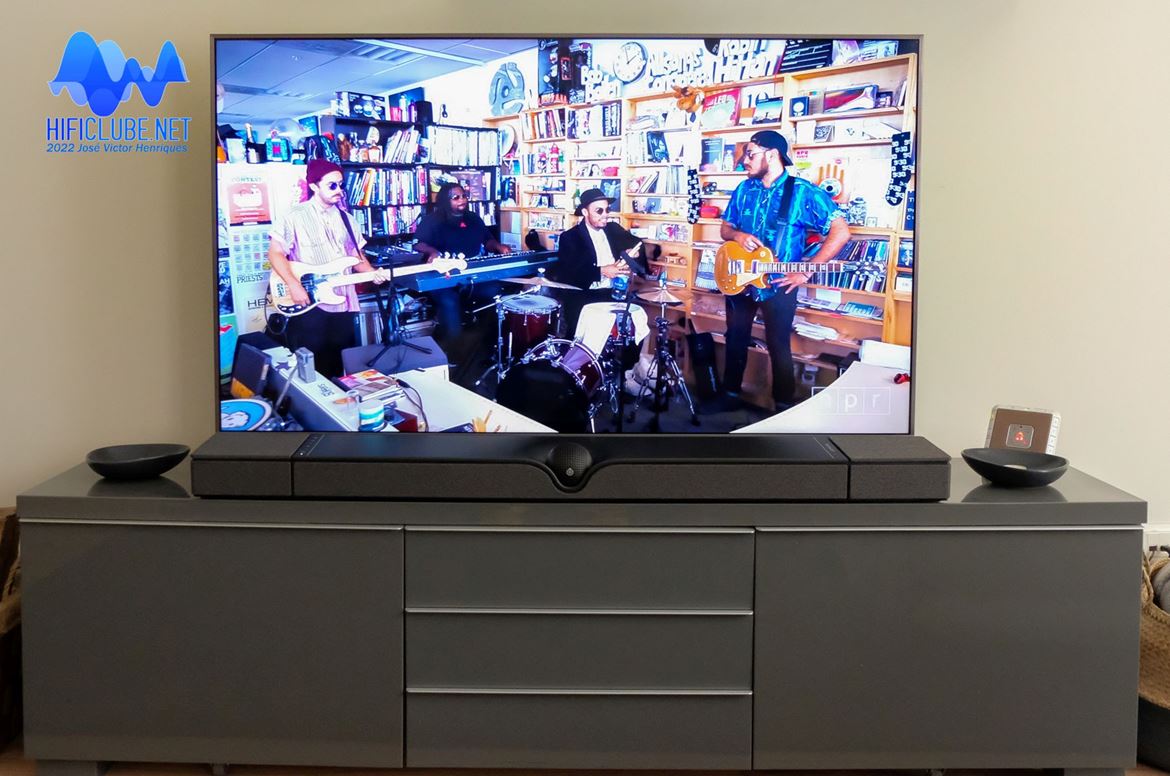 Anderson Paak Tiny Desk Concert. Click on the singer's name below to listen with Dione. 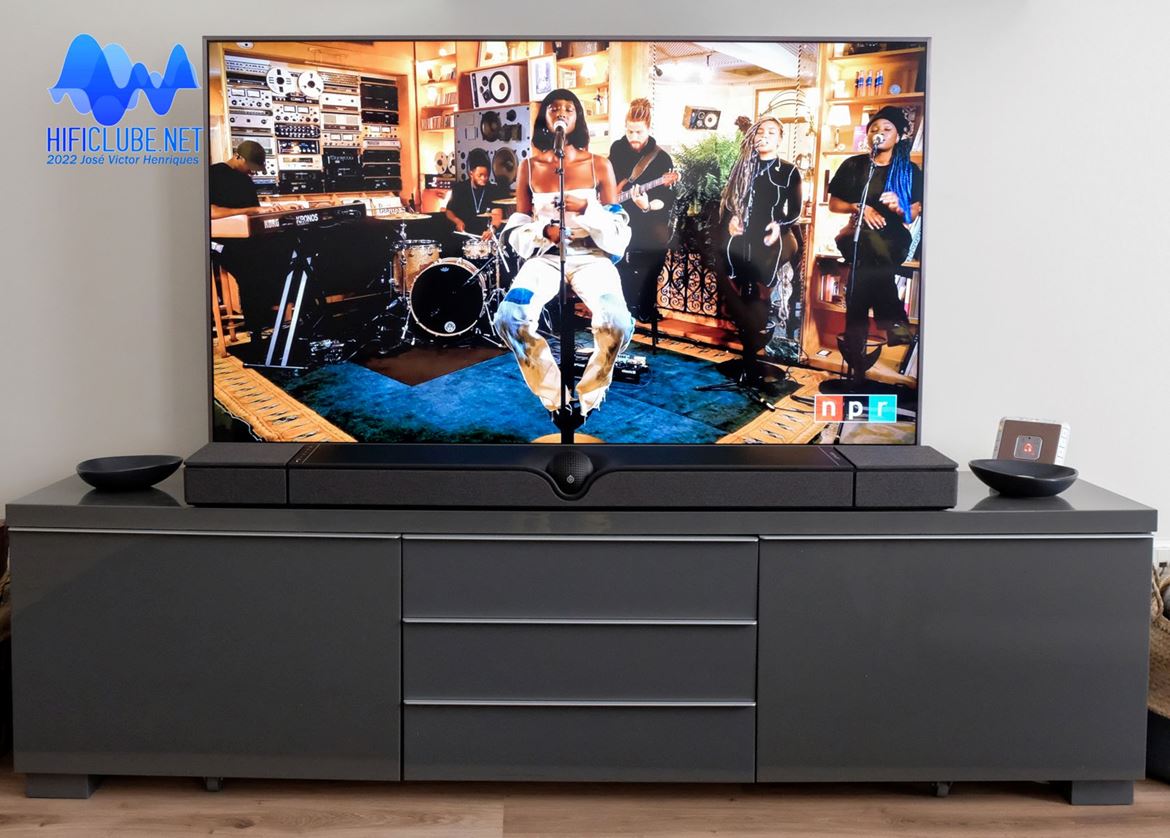 The Tiny Desk concert by the Belgian-Congolese Lous. Listen with Dione and cry for more...

Lous and the Yakuzas, French ethnic music, absolutely fantastic in rhythm and seduction 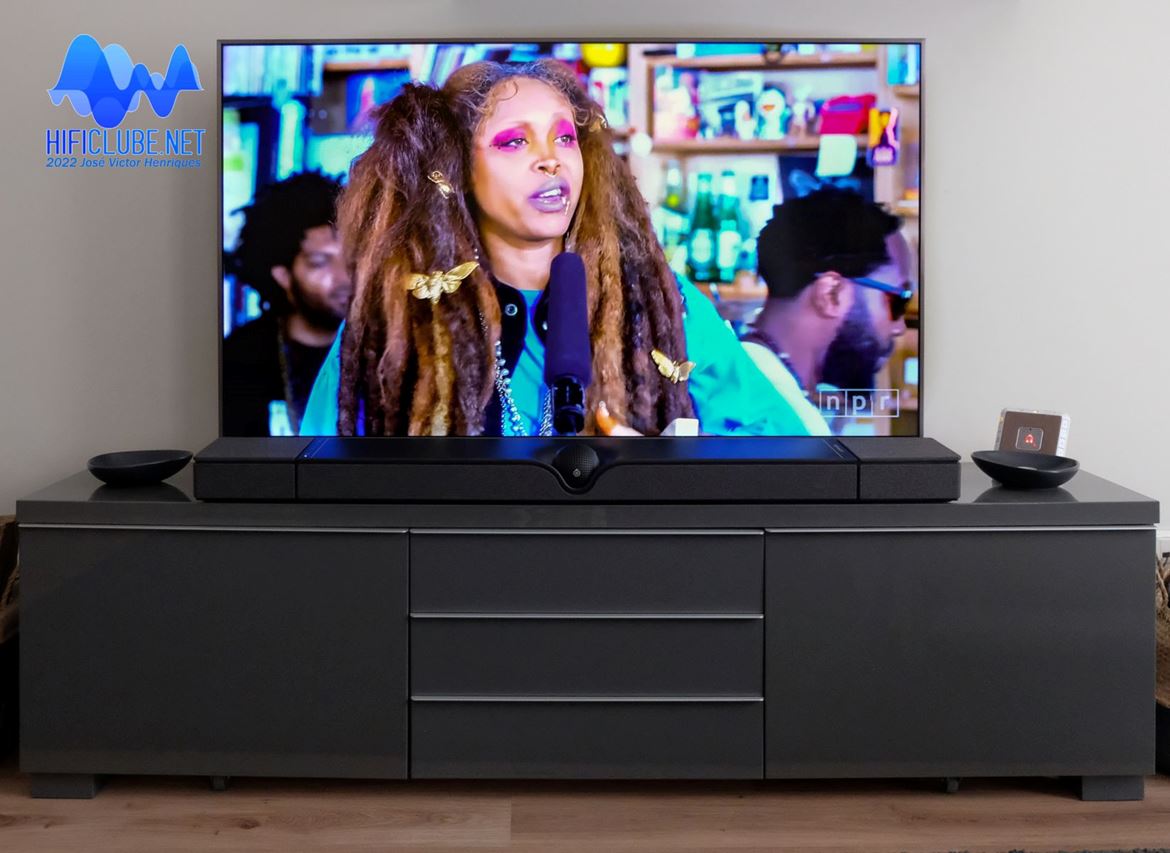 The irreverent and eccentric Erykah Badu in concert at Tiny Desk with a fabulous group of musicians. Explore the full potential of bass Dione's bass.

Erykah Badu. And to think I missed her concert in Las Vegas by one day!...

If you think the bass is too much, Night Mode is the only way to reduce it. However, the subsequent cut below 80 Hz works best to control excessive chestiness in female announcers on the news but might rob the music of energy. 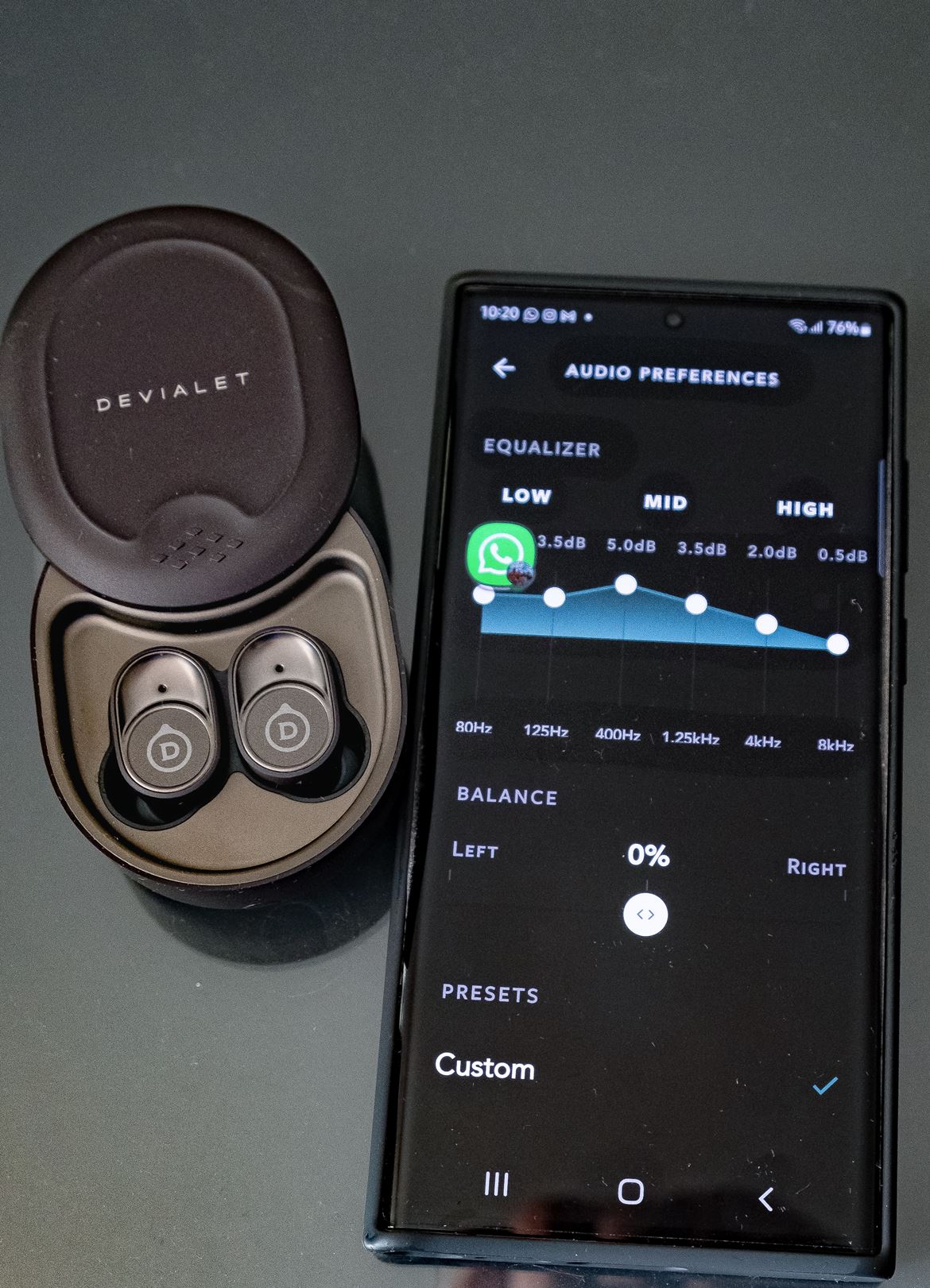 It's a shame Devialet has not integrated the equaliser from the Gemini headphones app into the Dione app.

It's a shame Devialet has not integrated the equaliser from the Gemini headphones app into the Dione app. A small step for Devialet and a giant leap for Dione. 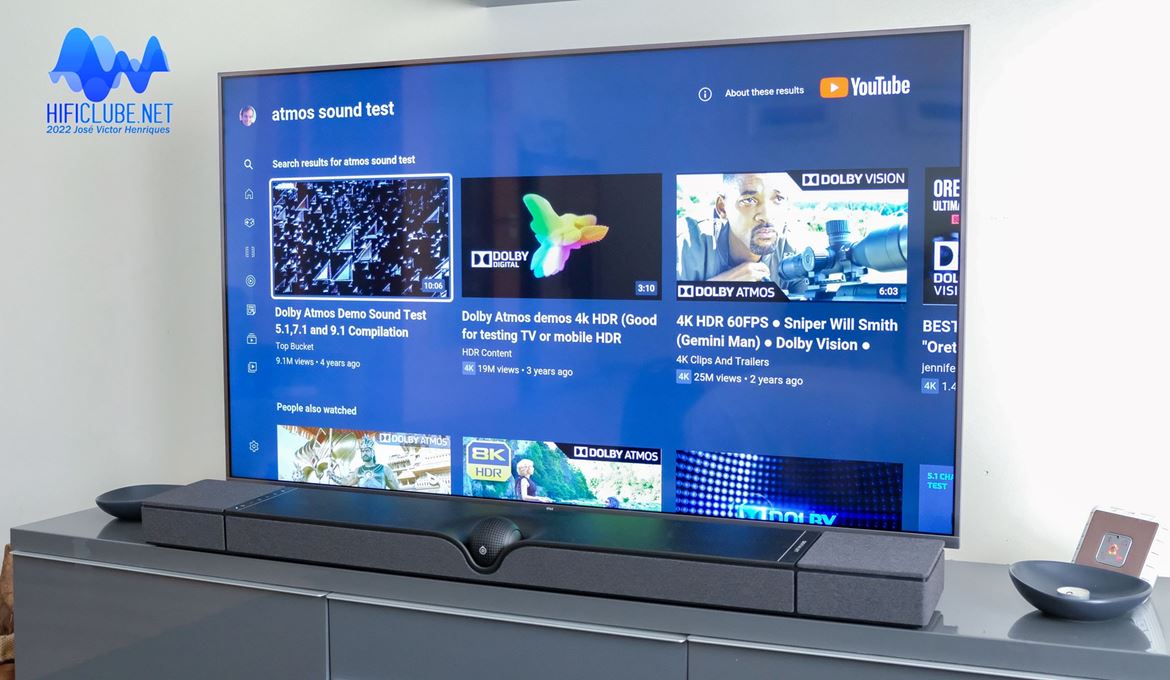 For action and feature films, the bass sounds spectacular and impressive. The HDMI connection leaves the decoding of Dolby Atmos to TV (Spatial is not available with HDMI), and the performance is outstanding.

Try the Atmos Sound Test on YouTube and take the opportunity to watch the Gemini Man trailer, featuring Will Smith as a sniper, to test the bass, dialogue, and horizontal sweep (the TGV crossing the screen from right to left at high speed). 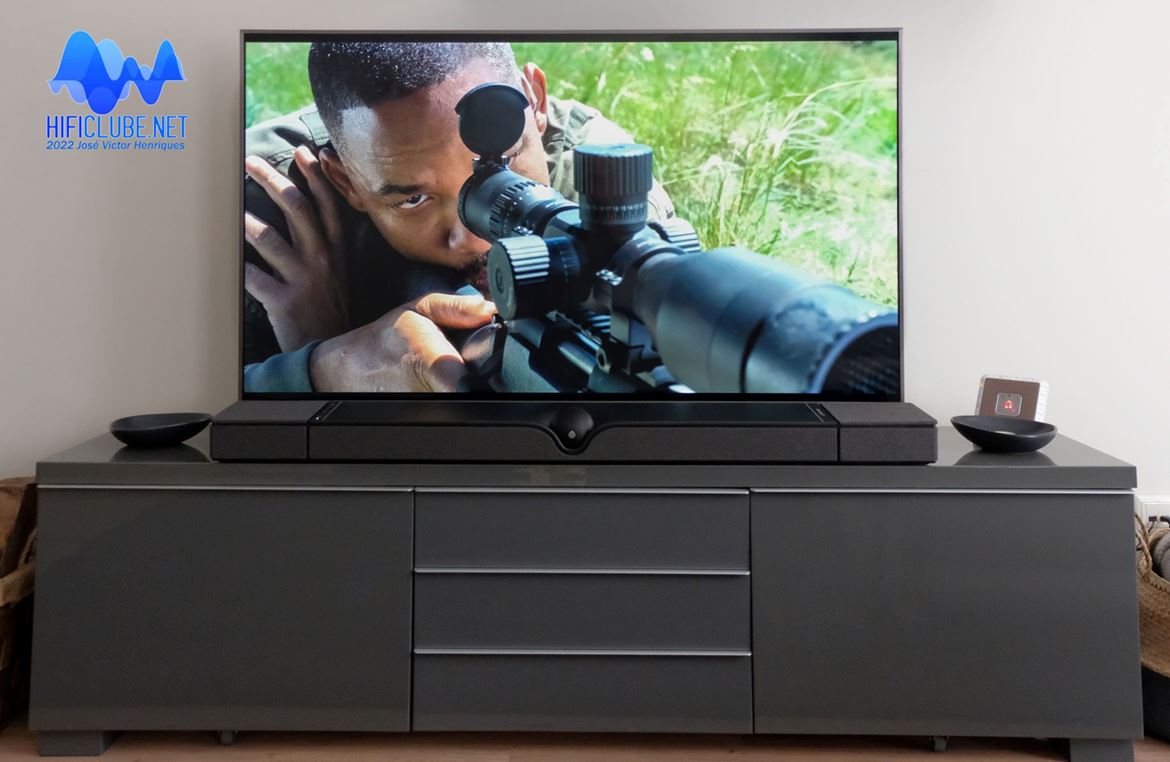 Gemini Man. A clean shot on a high-speed TGV passenger. Have fun with Dione.

What surprised me most was that the Dolby Atmos sound on YouTube was much better than on Netflix (The Grey Man), perhaps because my Xiaomi TV has no eARC input, only ARC.

Dione should be at the top of your list if you are the kind who buys only the best or nothing. It sounds natural on vocals, coherent on music and expansive with movies. And the power and extension of the bass are nothing short of sci-fi quality.

I am going to miss Dione. And very much so.

Dione: a sleek, discreet design that takes up no space.

Dione: it's all about (and around) ORB.

Oblivion: the thrusters on Tom Cruise's ship are reminiscent of the ORB.

Live concerts and music with lots of ambience are candidates for Spatial mode.

Anderson Paak Tiny Desk Concert. Click on the singer's name below to listen with Dione.

The Tiny Desk concert by the Belgian-Congolese Lous. Listen with Dione and cry for more...

The irreverent and eccentric Erykah Badu in concert at Tiny Desk with a fabulous group of musicians. Explore the full potential of bass Dione's bass.

It's a shame Devialet has not integrated the equaliser from the Gemini headphones app into the Dione app.

Gemini Man. A clean shot on a high-speed TGV passenger. Have fun with Dione.