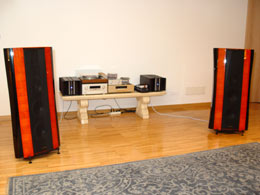 The system comprised an Accuphase DP75 CD-player, Cello Étude preamplifier and Krell FPB350cx amplifiers connected to the Stradivari by a modest pair of Supra cables. 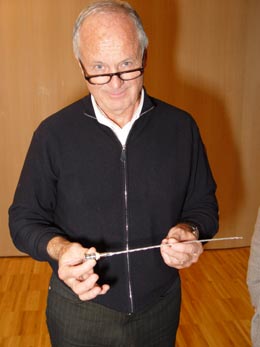 Franco has an interesting theory about cables. He defends that both the internal cabling of a speaker and its binding terminals should be made of the same material. He even went as far as suggesting that preferably - but not necessarily - this theory should also be extensive to the cable that connects the speakers to the amplifiers, only in this way it is possible to achieve, and I quote, «metallurgical coherence».

For the Stradivari Franco created a custom stranded cable and terminals made of a silver alloy with a special molecular structure similar to the one used in “tooth fillings” based on his expertise as a mechanical dentist. Ouch! 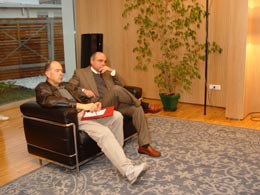 Yours truly and Martin Colloms caught in the act... of listening

The Stradivari sounded like a live performance in a real venue, filling the room with sound and doing the proverbial vanishing act. Maybe less so because you just couldn't take your eyes off them. Given the larger than usual baffle, focus is not to the pin-point accuracy standard of, say, the Wilson Watts Puppies (their natural competition in this price range), suggesting some attention to “toe-in” to further sweeten the 'spot'. On the other hand I must confess I've never heard live “pin-point focus” as the instruments and singers usually energize the air around them creating a “bubble” of sound not just an “ideal” point source. In this particular aspect of sound reproduction, the Stradivari is closer to reality.

The sound stage is so transparent and dimensional I could swear I was listening to electrostatics or open-back dipoles, had I not seen them first by the back while entering the room. Resolution is also to a very high standard with reverberation decay (either natural or electronic) dying away into silence in a dignified and natural manner.

Bass is tight and articulate, if slightly over-damped so as to better integrate the informative lower midrange, but not at the cost of power and impact as Franco proved by cranking up the volume for a brief moment of a “rocker's” paradise. Elegant as it may look, the Stradivari has balls and energy to boot. And yet the Stradivari sounds tonally ripe and fruity, as a well matured Italian red, even at low levels which is the mark of all great speakers according to Martin Colloms.

The “high-hats” were reproduced as they should with that shimmering filigree of harmonics orbiting each initial fundamental note. I heard no midrange colorations other than the ones present in the few tracks played that I knew well, like the slight lower mid “bloom” in Diana Krall's voice who nevertheless sounded all the more sensual, with each piano note sounding as clear as a bell and each note of the accompanying tube amplified semi-acoustic guitar melting beguilingly like drops of hot chocolate. Integration of the different units sounded seamless at the right distance from the speaker and did not seem to suffer unduly from listening height. 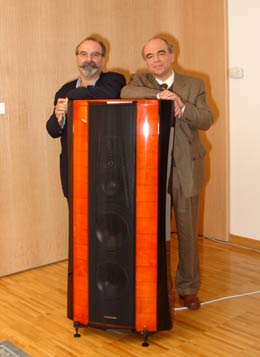 JVH and KK: the Stradivari is a reviewer's dream

I don't recall having been so impressed by a single 20-minute audition (despite standing most of the time, talking some of the time, or sitting in turns with Ken and Martin on the couch) in the unknown acoustics of a strange listening room with a system set up by other than me. If only they would let me loose in that room for a full week's tweaking…

Now that I am back in Portugal I suffer from withdrawal symptoms like a youngster who having fallen in love on a weekend in Venice can now only hope to see his beloved again soon. Hélas, soon is always too late for those who love, although I admit I have had my share of “crushes” on many a speaker in my life before and somehow managed to get over it. But the Stradivari dug too deep into my audiophile heart.

I finish by quoting a famous Portuguese 16th century poet who admired the great Italian poet Petrarca: “Love is a fire that burns, yet can't be seen”. The Stradivari lit up my fire with its beauty and sound.

Back to Part 1: Franco Serblin's capolavoro