I listened to Magico Q3 in Vegas for the first time in early January at the Venetian (CES 2011). It impressed me very favorably but there was something amiss, call it coherence, natural texture, congeniality. There was a lack of seamlessness in the way all those drivers contributed to the sound, whatever that might mean to someone who doesn’t have a clue what I am talking about.


Some would say they sounded “green”, lacking in ripeness, definitively not matured in wood, like a young Beaujolais wine. Not so in Munich. They sounded riper, fruitier, better flavored and with a lot of bouquet with all kinds of music.
Truth is I myself sometimes don’t have a clue as how to express the tridimensional reality of music with the limited two-dimensional structure of writing, so you are free to skip it and scroll down to the HDvideos below and you can listen for yourselves to the two selected musical track excerpts that will give you a much better picture of what really happened in the Magico/Soulution room in Munich contrary to my petty verbiage:

What you listened to in Vegas was not a production model. This is a production model. That’s how all the Q3 will sound from now on, explained Yair Tammam, while at the same time revealing his secret wish to be back to Portugal soon: I love the people, the food, the weather, and…ah… what was really the name of that wonderful seafood restaurant in Cascais?...


My dear friend Ricardo Franassovici, who is Portuguese at heart, was also in the room with the rest of us, and out of his attaché case he produced some selected CD tracks with impressive bass lines.


The Q3 bass does not have the power and wallop of the Q5, I hastened to comply with Ricardo, after a few minutes into the demonstration, and yet I prefer somehow the Q3 voicing which sounds more congenial, both spectrally and tonally. The acoustic structure is all made of the same fabric and texture from top to bottom. 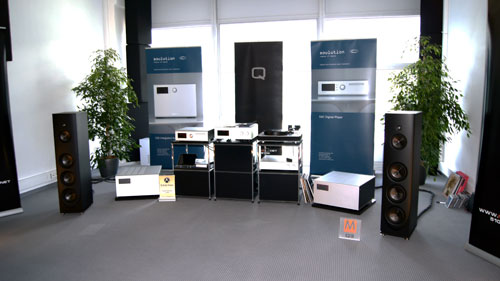 As a result the rhythm foundation of the music is not rendered just by the bass section (drums and bass guitar) as is often acknowledged by common sense.  Voices and instruments sounded as if propelled by the same sense of energy and urgency which was quite contagious to an unwillingly seated listener: I kept trying not to stand up and dance making a fool of myself


There was a positive vibration in the air all the time the Q3 was playing. And I, for lack of better evidence, tentatively attributed that stimulating effect to the widely publicized absence of mechanical colorations, due to the exclusive use of the complex internal metal frame that keeps the also metal cabinet unflappable at all sound pressure levels.

A feature which is supposed to convey to the listener an uncanny awareness of the intricate string of notes that just lurks timidly underneath the musical picture with minor examples of the audiophile industry. True art is in the details: the myriad of minute threads that weave the melodic fabric is the clue to the subsequent artistic tonal work that gives the sound body, texture and colour. Add the perceived sense of light and air in a good recording and you end up facing the proverbial holographic image.


It was thus with incredulous eyes I witnessed the painting of a magical garden of sound on the huge field canvas, apparently unbiased by loudspeaker positioning (too wide apart for my taste), and with a palette choice slightly verging on the cool side of neutral. As befits nature, not like the endemic technicolor hifi of today.


The sound of the Q3 has less scale than the Q5 but the “voicing” is more Mediterranean, warmer or, dare I say it, less “industrial”, considering all the metal work involved, as if blessed with a touch of oak spirit by its creator to oblige me... 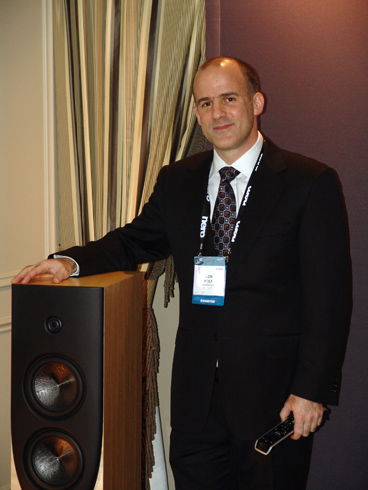 
Alan Wolf, whom I have always found somehow introverted and, like all genius, detached from the boring realities of marketing and press obligations (critics are a particularly nasty breed, I concede to you), had a big smile on his face when I complimented him on the improvement of the Q3 since Vegas: crossover? drivers? cabinet? Just science, he said. If so, it seems science has finally found its way into art.


It is ironic that a loudspeaker so scientific in its development could be made by a company named Magic(o), hence perhaps the technical code name “Q” to boot.


I’ll be testing the Q3 soon, and Ricardo has promised to send me the very same tracks used at the demonstration in Munich. Only the amplification and cables (and thank God the room) will be different: Devialet D-Premier and Dan D’Agostino Momentum. Well and I will be drinking a glass of fine Portuguese red wine from Douro instead of the insipid Franziskaner Weissbeer...